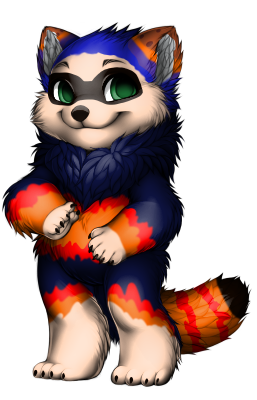 You're a kid you're a- raccoon? I don't think that's right, oh well.

Personality : Very excitable, curious, hyper and loves to have fun. He doesn't like following rules and often cheats or makes up his own rules to make things more exciting and knows how to avoid punishment for doing so, doesn't really know how to take things seriously at most times. He's also a bit of a prankster but all his pranks are in good fun and tries his best not to upset anyone by doing them. He enjoys go-karting way more than turf wars.

Bio : Um.... above says all. He's just a kid who likes to have fun and pull pranks, not much more to add really. His dad does own a used car lot though and he often travels but that's all I can add.