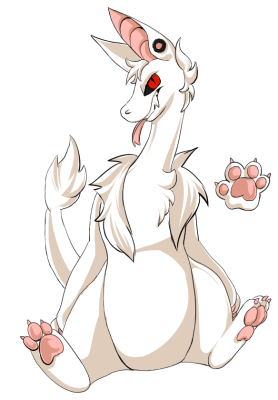 Greyfeather sighed as she watched Indigo race up the stairs two at a time up to the top of Frostwing's tower. After he left, she focused her gaze on the topic of their conversation. Marshmallow sat still, doing his best to look as sweet and harmless as his namesake. After a while Indigo came half bounding, half flying down the stairs with a grin on his face as wide as his wingspan.

Marshmallow is as sweet as can be around his friends, but living in Dragonsmaw Manor has hardened him somewhat, and he won't hesitate to bound to his friends aid should they ever need it. He is very fond of Indigo's cooking, and has taken up tailoring in his spare time. While he does enjoy eating his namesake sweet treat, he is very fond of ice cream, cakes, and all things strawberry. Indigo gave him a Two-Scoop Sloth to keep as a pet, and is the one sweet, ice-creamy treat Marshmallow will never eat.

Marshmallow is the only one other than Frostwing who can see and hear Sanctus, much to the ghost's annoyance, as the Jellope doesn't fall for his pranks, and often causes them to backfire horribly.

Marshmallow was my first explorer to find a Gem Raptor Morphing Potion.

Useless trivia: The juice from the Marshmallow plant has been used for centuries as a medicine for sore throats. In the early 1800's in France, the juice was mixed with sugar and egg whites to create the first Marshmallow treats. Modern marshmallows are now made from gelatin rather than the juice from it's namesake plant.