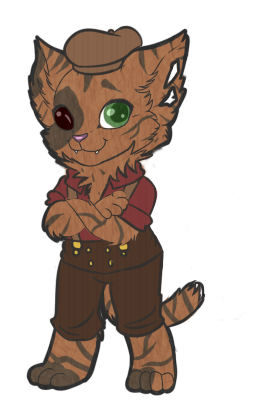 You've never talked to him before, but he's there at the Inn and pub every night, eating whatever they will serve to their tenants. He's an ugly cat, but not old. On the contrary really. He's a young fellow, and a shame he has such an ugly eye and nasty fur, because from the way you hear him talk to others his personality is beautiful.

The children in town refer to him as "The Man with Half a Tail". And you can see why, part of it is missing and it makes him walk with an ever present stagger. You try not to stare at the bald spot on the tip of said tail, lest you be labeled rude.

You've seen him a time or two outside of the Inn, on your way from here or there. While running errands you might glimpse him with his easel set up and a blank canvas before him. Homemade paints spattered on a makeshift palette and a brush in his paw while he thinks. He watches birds and paints stray animals.

He won't last long doing this. When it comes to paintings the money is in portraits, and everyone knows this. But he seems oblivious to it all and goes about painting. It's as though he lives in a world of his own.

Sometimes he might tip his hat to you and wish you a good morning, smiling so wonderfully, all ruined by that ugly eye he has. And you nod your head, you smile, and you try to hide your disgust. You're certain he knows, but he just keeps smiling and returns to his craft.