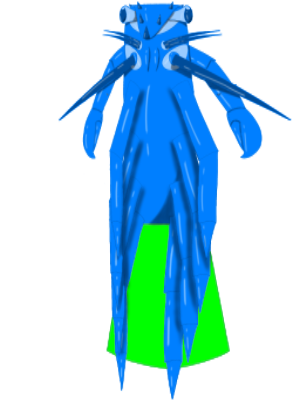 Bean is infected with Vampirism. Symptoms include craving blood, sensitivity to sunlight, an allergy to garlic, and changing into a bat after especially forceful sneezes. If they start to sparkle, immediately consume a Golden Apple to cure the infection.

Nickname: Bean
Pronouns: She/Her (is only listed to prevent confusion, she doesn't care too much)
Gender: Indifferent Female (Indifferent about her gender, looks female)
Orientation: Asexual (still figuring out who she likes non-sexually, but definitely likes male/masculine genders)

Bean is a lobster from an alternate universe where Earth is 3/4 land and 1/4 water. She wears clothes on her tail because that is where lobsters wear clothes. She is able to see through things with her eyes. Other than being a lobster, she is just like her human counterpart. She likes playing video games (Waterproof, of course), doing crafts, and eating ice cream (made of krill bioluminescence). She hopes to one day meet a human from her planet and keep it as her pet (Keep in mind, humans from her planet are much smaller and not as smart. They are like lobsters on our planet. Some lobsters eat them, but she would like to keep one.)