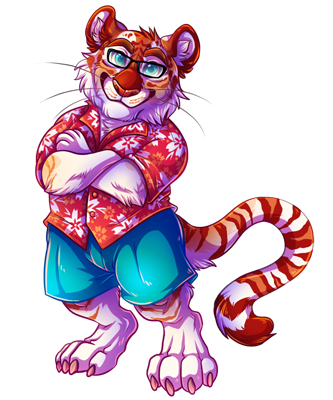 
Augustine is a genuinely simple man. His motivations when it comes to others simply aren't that complicated; he wants the best for those he cares about and will gladly take the shirt off of his back for them. However, this isn't to say he's a bad businessman. Augie separates his work and home life effectively, and can play the game that comes with making business deals and entertaining difficult decisions with efficiency. It isn't necessarily his choice, but he's also well aware that this is how progress is made.

While he spends a lot of time at the office, Augie spends his free time generally being a complete and total nerd. From video games to d&d with his buddies, this is the way that the tiger decompresses after a long day at work and has always been a great passion in his life. Of course, he's always been the group dad friend, and that only intensified when he became a father.

The tiger's greatest pride is his daughter, Clio. Just like her father, Clio is a nerd and they spend plenty of their quality time together playing video games. Augie would even DM d&d campaigns for Clio and her friends when she was younger. She's 20 now and currently attending university as a computer science major, but she makes plenty of visits to Augie during weekends.

While Clio's mother and Augustine are no longer married, having been divorced since their daughter was five, they are still very much on amicable terms and consider one another family. The reasoning for their divorce was Augie's belated discovery of his own sexuality. He's gay, and his ex-wife supports him for this. She pushes him to go out and actually date and he's certainly done some, but nothing that really stuck.