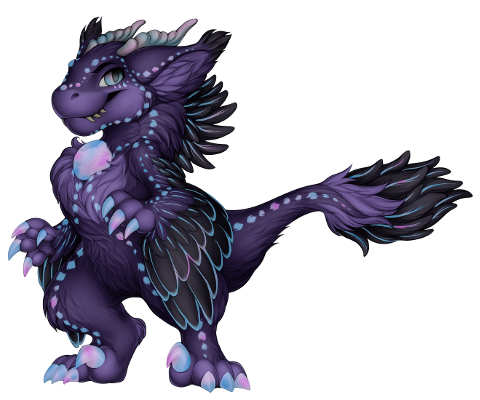 Stepping into the tailor’s workshop, you see an unusual-looking gem raptor at a table, happily sewing away while Genesis is taking measurements from Lyra in the front. He looks up at your approach, pausing in his work.

"Hello. I don’t believe we’ve met. Are you visiting?"

"Cool, cool. My name is Asara. I work here under Genesis’s tutelage, learning how to be a proper tailor. It’s a much more satisfying career path than my previous one, that’s for sure."

"Mmm, what was I before? A blacksmith, originally. I was following in the footsteps of my family - we’re traditionally forgers, born and bred in Olde Foxbury, you see - but it just wasn’t...right, for me. When I finally found what I wanted to do, I got laughed out of the house for it. My dad especially didn’t like it. A strong lad like me, sitting in the house sewing? That was women’s work, and no son of mine will be caught dead doing women’s work. His words, not mine."

Asara quirks his lips into a bitter smile.

"I’m not his son anymore. He was happy enough to disown me when nothing he did would change my mind. And I mean nothing."

"But you’re not here for that. Did you come for a costume? Our shop’s normally nail order but it would be beyond dumb to make you mail one in when you’re literally right here."

"No? Alright, lemme or Genesis know if you change your mind. We don’t charge much for them."

"Oh no, Genesis wasn't always my teacher. Originally, I apprenticed to a tailor in a town in Dragon's Maw Manor, but we didn't really...click. Something kept nagging me in the back of my mind that there was something just...off, about the man, but I couldn't figure out what."

"Then I found out he was capturing villagers and using their furs in his products. I was horrified, obviously. I was lucky that the town was close to the capital city - the law is more enforced there. Heck, in some villages, what that man had been doing was actually legal! Can you believe it?!"

"Okay, so I had to start a mini riot to get the law enforcement's attention, but it got the man arrested so there."

"Anyway, I left Dragon's Maw Manor after that. Couldn't stand a place like that. I didn't want to go back to Olde Foxbury, so I decided to try hitting up Oceandome and Tiger Eye Peak first. And while I was in Oceandome, I heard about Ouroboros - or more specifically, their costume shop. And if they were running a costume shop, then they had to have a tailor; one who would appreciate an extra set of paws, or so I hoped."

The gem raptor gave you a pleased smile.

"You want to know my hobbies? Well, I really like sewing. It’s quite relaxing for me, working with a needle and thread. Just the same repetitive motions for the most part. It’s like a...a moving meditation for me, if that makes sense."

"Yep, one of Amelia’s. She’s Genesis’s pet hedgehog, and very cute. All of our sewing needles come from quills she’s shed. Amelia’s quite the spiky missile, too - I didn’t know hedgehogs could jump that high! Who needs a guard dog when we’ve got Amelia, huh?"

"Oh? Yes, we’ve had an attempted break-in before. ‘Attempted’, being the key word here. They certainly didn’t try that again, that’s for sure."

"You saw a peryton out front? Yeah, he's mine. His name's Aragon, and since he can't be in here while I work, the poor guy likes to mope through the window, see?"

"Don't worry, we go riding right when I get off from work. I take good care of him, just like he has with me."

"Alright, I’ve gotta get back to my work. We’ve got several costumes lined up in queue, and they won’t make themselves. Be sure to say hi to Genesis on the way out, alright? See you later."

And with that, the gem raptor turns back to the costume on the table, picking up his white hedgehog quill to start sewing again.