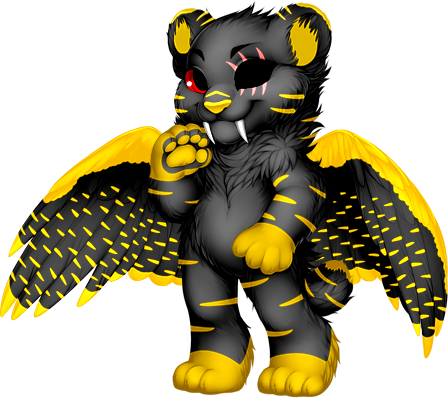 Credits and special thanks:

Design created with a random OC meme
Paintie made by Uendo
Background image and logo made by KaidaCresto
Thanks to Snerd for the paintie ticket gift for me to upload her!
Theme song made by HorseCrazyGamer

“Oh, don’t worry, it’s not personal. This is because of my issues, not yours.”

Wren is a young assassin sabertooth who constantly claims she only does her job to put food on the table. She is asexual, though she wasn’t always.
She didn’t have a very good upbringing. Her mother practically ignored her, and when she paid attention to Wren, she would constantly go on about how Wren was never going to be anything.
Wren basically fended for herself by the time she could eat solid food, as her mother was never around to take care of her.
When she was the sabertooth version of a teenager, she met Aqua, a kind teenage snow leopard who was understanding despite her having a good family. Aqua and Wren spent more and more time together, until finally, they started to date. They dated for a couple months, until Aqua was assassinated. This left Wren devastated. Wren started to search for answers, until Wren’s mother approached her for the first time in months and admitted she had hired someone to kill Aqua. Wren attempted to fight her, but after her mother badly injured her eye, Wren fled.
Wren got surgery to get her eye removed, as the doctors couldn’t fix it. She met a werecat assassin named Holly, who Wren quickly became friends with. Holly heard the story and had an idea. She told Wren, “I know you don’t have much money right now, but for $100 I can teach you everything I know so you can get revenge on your mother.”
Wren began doing small jobs for people to save up the money, and eventually, she got it. She paid Holly and Wren was trained to become skilled with handling a gun. Wren learned quickly, and by the time 6 months had passed, the training was complete.
Wren knew what to do now. At nearly 2 AM in the morning, Wren intruded in her mother’s home. Her mother was soundly sleeping, but woke up when Wren tripped on something. Wren’s mother came downstairs to see what was going on, just to be quickly shot down by Wren.
Wren fled the scene, and to this day, she is still wondering how she wasn’t caught. Wren was still a young adult by the time this was all over, and she quickly came to realize that the small jobs she had been doing were becoming less paying and less available. She realized that the only talent she had was all her training with assassination, and that had much more pay. And so she became an assassin to support herself, and though she isn’t happy with it, she’s alive.