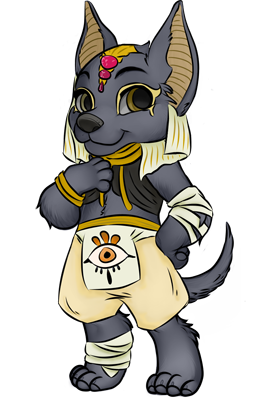 Anoup is infected with Vampirism. Symptoms include craving blood, sensitivity to sunlight, an allergy to garlic, and changing into a bat after especially forceful sneezes. If they start to sparkle, immediately consume a Golden Apple to cure the infection.

Anoup used to be a fierce warrior from the ancient kingdom of Maru. They trained day and night to become faster and stronger so they could protect the chief and the maruvian people. Anoup aspired to become head of the royal guard one day.

However, one fateful night they went out hunting after a band of thieves who had been terrorizing villages on the edge of the kingdom. Much to their surprise, they ended up on a deep forest and got lost. It took them three days to get out of the woods and find the road back to Maru.

But when they arrived, they found a dreadful image. All of the people in the kingdom had been turned to marble statues. The streets were full of merchants, warriors and even children frozen in time. It was as if they hadn't known their lives would finish in that moment. Anoup rushed to the palace and to their horror they found the chief frozen too, but different. She was laying down on the stairs that led to the throne, with a dagger piercing through her chest. Anoup couldn't believe what she was seeing, they couldn't understand it. Had it been a curse? Who had done it? They had many questions, but no answers.

Anoup started an endless journey to find a way to undo the curse that had aflicted their kingdom, but time went by and they couldn't find anything. Even stranger, they seemed to have forgotten how to get back home and for some reason no one seemed to know anything about Maru. And with time they too started to forget about it.

Eventually, Anoup arrived to a lonely and eerie village in the middle of the forest. At first they intended to keep on their journey, but for some reason they felt like they shouldn't leave, no, like they couldn't leave.