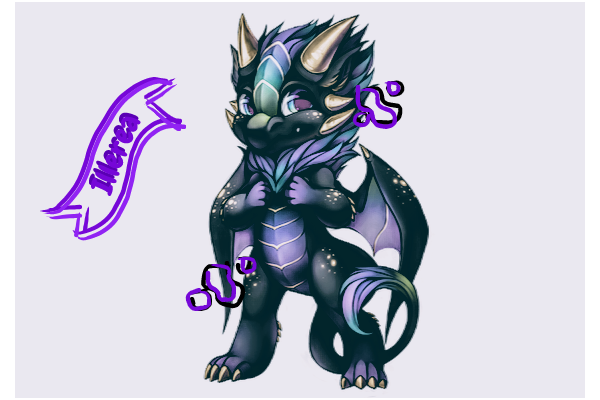 [b]
Likes: Painting, racing or playing video games with Azrael. He enjoys exploring. Comedy.
Dislikes: Sad/horror movies.
Good Habits: Exploring to find cool items for Azrael. Painting to relieve stress.
Bad Habits: Claw biting.
How to make happy/exited: Offering a good movie or new pens/paper/paintbrushes. Offering to create something for Azrael.
How to make sad/upset: Taking his movies away. Saying rude things about or lying to Azrael. He hates when people shun Azrael for being immortal.
Favorite food: Candy, ink (Yes, like pen ink. No one knows how he has survived this long, as he drinks at least one pen's contents per day).
Favorite game: Five Nights at Freddy's.
Favorite thing to watch: The Office.

Other:
-He greets people with the term 'unidentified being' so as not to offend them by using the wrong pronouns.

-Illerea is a somber looking dragon, but is really friendly.

-He's not judgmental, and likes to assess people by their personalities and how they treat others, not by their possessions or looks.

-He turned himself into a Glitch, a creature like Azrael, because he wanted to be immortal, with her forever.

- He sometimes makes visits to random people around Furvilla. When he visits, he sometimes leaves little gifts behind him. If you're lucky enough, he may invite you to an event. What is this event, you say? Well... you'll find out if you're lucky!