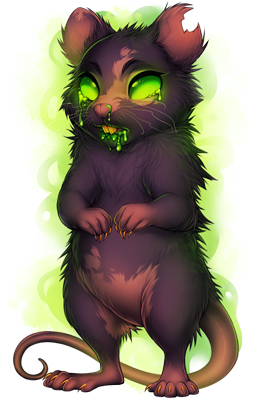 Bio: he was born as a lab rat, the unit they were in is unknown. A scientist was very friendly and gave him his name, "Hero" was the name, because that scientist thought that if he survived the experiment, he would be seen as a "hero" by all the other rats. the experiment was if a simple rat could live in a climate of only radiation. meaning radiated water, food, territory, and oxygen. he survived, but was changed.. his eyes had lime green liquids forcing its way out of facial openings. the scientist studied him, turns out, he is completely fine on his own, as long as his body could dispose of the fluids constantly. he "saved" his colony.