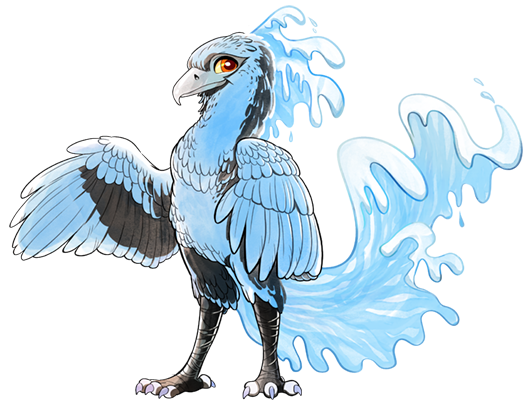 As you walk along the beach, you see a young boy with a watery crest and tail rather than the normal feathers of other raptors organizing various colorful stones in an open box. The box in question has multiple trays stacked on top of each other, each with an indent where a stone could be securely placed.

"Oh hi! Are you visiting? Duh, of course you’re visiting, you wouldn’t be exploring the place if you weren’t. I mean, maybe if you were a new arrival, but miss Zinnia would have told me if anyone was moving onto Or'boros. Anyway, my name’s Caspian, and this little rocky mimic is Copycat. It’s nice to meet you!"

"What am I doing? Oh, I’m organizing my stone collection! Isn’t it cool?! Colorful stones, magical stones, depleted stones, I want them aaaaall. See look, here’s a bunch of watercolor raptor stones to make you look like me! Aren’t stones awesome? Ooooh, do you have any stones I haven't seen yet? Kahjah and Brenna sometimes bring back cool stones from other places like Olde Foxbury and Quetzal Palace and Dragon's Maw Manor, though I've only ever been as far as Old-"

Caspian immediately shuts up, looking around worriedly. He gives you a guilty look, before continuing.

"Well, um...I kinda snuck away with my best friend, Lyra, on the boat. We got all the way to Olde Foxbury, and oh man, did we get in trouble for that! Azalar was luckier - he's my little brother, and he made it all the way out to where his friend mister- highness- err, no no, King Koa lives and he actually got to sneak off the boat there! Without getting caught! He's done it multiple times, I gotta know how he does that. He keeps saying he just steps lightly, but Lyra and I can't copy him no matter how hard we try. And believe me, we've tried."

"Lyra and Azalar? Yeah, they're two of my friends. Lyra's older than me, and Nocturne is too by like, a lot, while Corwin and Caireann are my age, but Azalar's younger, no matter how long he's been around. It doesn't matter if he's older than dirt if he's never gotten older than six! He's just a little younger than me, but he can be a bit of a baby sometimes - I mean, he still colors in coloring books! Those are for babies!"

"What? Adults color in them too? Really?"

Caspian carefully starts packing up his stones, placing them into their places with reverent care before closing the box.

"Oh yeah, before I go. If you got any cool stones, I’d love to take ‘em off your paws. I can even trade you too. Then we can both get the epic stones we want!"

Caspian hugs his box close to his chest, an expression of abject horror on his face.

“I’m not gonna give up my stones to the Serpent! I know its super helpful and all and keeps Quetzal Palace floating and stuff but we don’t live there and these are mine!!”

And you thought Belphegor and Peridot were supposed to be the ones with a hoarding problem...you highly doubt even the Serpent itself can get the kid to budge on this.