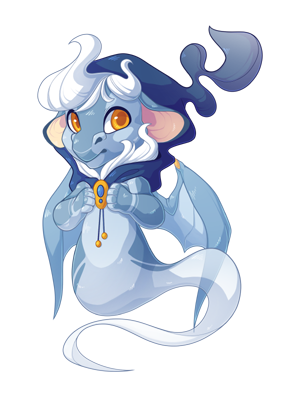 
Having come back to Ouroboros with some friends of yours to get cured of a curse you caught at the Harvest Carnival, you find yourself unable to sleep for some reason. Maybe it's because it's Halloween night. Leaving Seraphina's clinic, you wander the roads for a bit before you see a pale glow ahead. Speeding up, you see the culprit is a whole group of ghosts - several kids being herded by a pair of canines, all dressed in the strange clothing you’ve seen on Anubis and Amun, a red panda, and a dragon Shiloh seems to be leading into the woods. The dragon at the tail end of the procession stops and turns to look at you.

"Oh? Who are you? No one’s mentioned any new neighbors..."

"Oh, you're visiting in a group? That's nice. What's your name?"

"I'm Helena. Pleased to meet you."

You can't help but gape at the ghost, knowing the story - and that Ronan's wife was named Helena. This can't be a coincidence, but Ronan would've introduced you to his wife, ghostly or not - and what was she doing out so late with all of these ghosts and Shiloh of all people?

"Surprised to see us, are you? We’re not lingering spirits unable to move on; I for one have been in the afterlife for almost half a decade now, Anubis and Amun’s friends even longer. We’re only able to be here because of Shiloh here."

"Don't you know? Samhain Spirits can cross the boundary between the worlds of the living and the dead. But because we’re not lingering spirits, none of us can stay more than one day. We’re only able to come at all because the veil is the thinnest during Halloween, and Shiloh is willing to show us the way."

She smiles at you sadly.

:The day is nearly up; Shiloh is guiding us back to the afterlife."

"Why is he doing this for our families? Because we're friends, and he hates seeing his friends in pain. Granted, he didn't know me or the other deceased at first, only their living family, but we have all become good friends since."

"So many people braving occult rituals and deals with demons to return loved ones from the dead, and Shiloh here asks only for candy in return. He'd do it without the candy, don't get me wrong, but it's the least we can do to express our gratitude."

You can't help but ask about Belphegor. Shiloh can only bring her here for one day, and as a ghost besides; wouldn't Belphegor be able to return her to life? Helena scowls at the question; clearly, she doesn't think highly of the idea.

"Not a chance. Any deal we would make with Belphegor would come at a high cost, and risk my family besides. I have an opportunity I could only dream of before - do you know how many souls wish to be able to see their living family again, even if just for one day? Or even just an hour? We have that. And not just once, but every year."

"It's more than enough, until my family comes to join me. And that will be many, many decades later."

Helena gets a distant look in her eyes, before shaking her head. At your curious look, she gives you a sad smile in response.

"It's almost midnight. I have to go. It was nice meeting you; maybe someday, we'll meet again."

And with those parting words, Helena turns to Shiloh and the other waiting ghosts. The Samhain Spirit gives her a nod before turning and leading the way into the forest. You watch until their glow disappears into the trees, before taking a deep breath and making your way back to Seraphina's clinic. You have a lot to think about tonight.