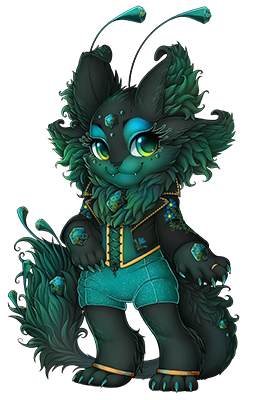 A white flash catches your attention out of the corner of your eye, and you turn to see none other than a gembound crouching with a camera held in both paws, a butterlotl draped over one shoulder, cursing as a flock of birbs and chirps take flight in terror.

"Dangit, that wasn't supposed to use the flash!" Hissing, the gembound stands upright, only to notice you behind him.

"Ahem. Sorry. I was just photographing in the caves further up Stony Hill and forgot to change the settings on the flash. My name's Juniper, and this is Mimi. What’s yours?"

"Caves? Oh yeah, there's a couple here in the - well, I mean, it's not a mountain, but it's not quite a hill either you know? Anyway, we've just kinda settled on calling it Stony Hilll; it's in the middle-back of the island, but you can pretty much see it from anywhere. There's only a couple caves, but they're pretty neat regardless. There's even one that comes out right at the shore, and the sea feeds into it! Pretty neat, huh?"

"Oh no, I take pictures of more than just minipets. Plants, animals, villagers...I do pretty much everything. It's so exciting, taking pictures; and the feeling of satisfaction you get when you take the perfect picture is just unparalleled."

"You wanna see some? Why sure, take a look!"

Juniper fiddles with his camera, before handing it to you. You take it carefully, before looking at the screen. There's a picture of a group of butterflies, of a school of mandarinfish swimming by the island, a rather alarming one of a Greater Slurth way too close for comfort with its hideous mouth open wide, Belphegor shooting the camera an extremely dirty look as he grumpily pours coffee into a cup, a Patched Bear tangled up in the branches of a large tree, and a rather humorous one of Tienyo chasing a virus beta bug through the window of someone's house while Pikabolt is holding onto one security and two internet beta bugs in her arms, a look of alarm on her electronic face.

But paging through, the one that really catches your attention is a strange, blurred picture of a king cheetah. It clearly isn't blurry through any fault of Juniper's - only the cheetah herself is strangely hazy; everything else is crystal clear. She's sitting on a rock in a sunlit clearing, writing something in a blue book, clearly unaware she's being photographed. You can't help but ask Juniper about it as you hand him back his camera.

"Oh yeah, isn't that one weird? I was paging through my wildlife photos at the end of the day and then bam, there it was! I don't even remember taking it, either. And I asked around; no one's ever seen anyone like that around. And she can't just be hiding either, Ouroboros knows everything on his island. He'd sense her in a heartbeat."

"It's like a bona-fide ghost story! Or mystery, anyway, we've got plenty of ghosts here already."

You realize that somehow, describing the rainbow-spotted king cheetah in the picture as a 'she' somehow feels right in a way you can't describe. You ask Juniper about the feeling.

"Yeah, me too. Like I said, it's just weird. And I know this clearing, too. I've never seen this girl again no matter how many times I go back, but it's not like Ouroboros is a small place, anyway. I try to keep an eye out while I'm going about my business, though honestly she could walk right on by behind me while I'm shooting and I'd never even realize."

Juniper laughs, scratching the back of his head sheepishly.

"Yeah. I get pretty good tunnel vision while I'm taking pictures. But then again, who doesn't get really into it with their hobbies? I get that way with video games too. We've got a group of us who get together to play things like Mario Kart and Super Smash Bros and stuff once a week, it's pretty fun. And I’m pretty good if I do say so myself. I’m the reigning Smash Champion for a good three weeks now. Took my crown back from Pikabolt when she snatched it from me one session.”

You reassure Juniper that he didn't, and you'd been curious about his pictures, too. The gembound looks relieved at that.

"What do I do aside from photography? Uh...well, aside from gaming, I scrapbook, sorta? I mean, it's not a scrapbook, per se, but it is an album of all the events that happened that year. It's pretty neat; I've got a whole bunch in my house, labelled by year."

"Oh no, it's not just parties and festivities. I mean, those are part of it too, but like when people move in, when Mateo and Brenna arrived, meteor showers, that one time a hurricane hit the island...things like that. It's supposed to be a memory of the year, you know? But anyway, when I'm not doing that I'm reading."

Juniper's ears twitch as rustling sounds can be heard from the undergrowth nearby. He very carefully raises his camera to his face, fiddling with something before holding perfectly still. You almost don't dare to breathe as the tension thickens in the air.

A small hedged hoyalty pushes it's way out from between the bushes, going about it's business. Juniper takes several pictures - without the flash giving him away - before lowering his camera and turning to you with a big grin on his face.

"Thanks for that. I love those little guys - don't they look like Shaymin, from Pokemon? I mean, come on, the resemblance is just uncanny!"

"Anyway, I've probably kept you long enough. I need to head back and get the pictures on my memory card uploaded to my computer, and email some to Holly too. She loves looking at my pictures."

"Holly? Oh, she's my twin sister! She lives way out in Dragon's Maw Manor though, so visiting is a bit of a pain, but well worth it. I'd say we were identical, but you can't be identical if you're different genders. But seriously, you can't tell us apart just by looking."

"Why do we live so far apart? What, you haven't seen siblings living out on their own before?"

"We're close, but not so close as to be surgically attached at the hip. We've got our own lives, but that doesn't mean we don't love each other any less."

"Anyway, enough of my sap. Have fun, traveler! And bring a camera next time!"

Juniper laughs at his joke, and then saunters down the road back to town. The hoyalty has long since disappeared, but you don't mind. There's plenty of minipets all over the island.

Though the mystery of the blurry photograph does linger in your mind...you can't help but mull it over as you carry on. Who was she? Why didn't Juniper remember taking her picture, and why was it so blurry in the first place?

You didn't know, but one day, you hoped you would. Juniper was right; the mystery was exciting. Maybe you could even help solve it? It was a nice thought for while you were here.