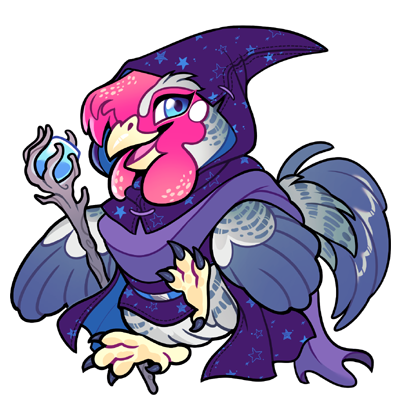 Name: Evan
Age: 15
Career: Fortune Teller/Mystic
Favorite Color(s): Purple, silver, and black
Likes: magic, spending time with his friends, making things explode, animals, his familiar, and listening to music
Dislikes: people not taking him seriously, being called a fraud, having to wait for the explorers to find a magic scroll in order to learn more, having his age held against him, and people smashing his magic orbs
Favorite Food: Mustache Munchies
Hated Food: Baked Furlaska
Other: Herbivore, Toyhouse

Walking through the town of Ouroboros, you realize that one of the houses doesn't quite belong. Unlike the rest of the coral slab buildings, this one is a large tent made of galaxy-patterned fabric. As you approach, you notice runes are painted onto the stakes holding the tent in place. Remembering that hurricanes will sometimes strike Oceandome, you decide that this must be how the tent is still standing.

Curious despite yourself, you push aside the tent flap and enter, finding yourself in what appears to be a nicely furnished living room, with a large rug on the tarp covering the ground, and a soft-looking couch and beanbag sit off to the side, lit by candles floating in the air, only to mentally groan as you spot a robed chicken sitting at a table, taking notes while staring into a familiar-looking crystal ball, an ember firecat curled up next to it.

A "fortune-teller". Wonderful. Though you've never seen one actually writing down whatever they were supposedly seeing in their crystal ball...

You're pulled out of your thoughts when the chicken notices you and gives you a friendly wave.

"Oh, hello! It's not often we get visitors here. Nice to meet you, [name]. I'm Evan, and this is my familiar Rhenarra."

That startles you. Since when did he know your name?!

"Yeah, I saw you coming. Oh come on, don't give me that look - I know fortune tellers and mystics have a bad name but not all of us are frauds! Sheesh."

You can't help but slide your attention over to the papers on the desk; Evan, noticing your shifting attention, turns his head to see what you're looking at.

"Oh, that. I'm writing down weather patterns and monster movements; I'm kind of like the local weatherman here. But things change all the time, so it's not like I can look once and know exactly what will happen. People's decisions alter the flow of fate, so the future's always in motion. For example, I saw you were supposed to get here yesterday, but then a sudden storm picked up and it wasn't safe for Kahjah and Brenna to sail till today."

That...was exactly what happened. Though you supposed the sailors who brought you here could've mailed ahead, but why would they? Like Evan said, Ouroboros was pretty far out of the way. Unless they liked to put a show on for visitors?

"Also, I saw your name as soon as you introduced yourself. The closer the future is to the present, the more accurate it is, since the ripple effects of change don't have much room to alter the course of fate."

"Huh? Am I a wizard or a fortune-teller? Well, why can't I be both? I need my magic to work my crystal ball, after all."

You suddenly realize where you've seen this thing before: it’s a frozen orb, one of the key ingredients used in making a sorcerer costume. You tell that to Evan, and he nods in response.

"Yup, it's one very magical ball. I mean, it's gotta be if I'm gonna use it to scry the future. And yeah, I can tell fortunes too, but again, the farther out into the future I look, the less accurate it is. And I'm not omnipotent, either. I have to be actively looking in my ball to see what's to come."

"So, what'cha here for? To see the sights, talk to some of the more exotic residents, or what?"

Puzzled, you ask Evan why he doesn't know that already. The rooster shrugs.

"Yeah, well, you never said why. And I wasn't looking at what you'd do while you were here, I was scrying for the movements of the winds and the rains. That's more important than just satisfying my curiosity, plus it's kind of rude. Anyway, if there's any major disasters heading our way, like really bad storms or a particularly idiotic monster who thought attacking our island was a good idea, I'm our early-warning system."

You can't help but ask what monster would attack an island - monsters in Oceandome are deep sea creatures, not surface monsters. Right?

"Well, sorta. Most of 'em are, but some aren't. There's a lot of 'em that'll attack ships and stuff, but only the really old and nasty ones would even think about attacking an island or beach town. Which, with all of the warriors living here, is a pretty suicidal move. They go all like 'rawrrrr-urk!' 'gwaaaah!' and then ‘wa-bam!’ They get sliced to pieces!"

Evan makes dramatic sound effects of the battle before snickering, and you can't help but laugh as well. It's a pretty funny mental image, that's for sure.

"Do I have any hobbies? Well yeah! Fortune-telling and scrying's kind of my job, but when I'm not doing that I like practicing with my magic! I'm not really the greatest yet...and am kind of self-studying from scrolls that've been dredged up by the explorers here...but I'm getting pretty good, if I do say so myself! The runework on the tent's pretty good, right? I mean I only just got Rhenarra and so I'm finally able to start working on a ton of the spells cause they need a familiar for 'em, but I don't for runework, and it's pretty cool stuff! Especially the ones Amun know, they're really freaking old! Older than the ones in my scrolls! And there's just something about runes that just click together like a puzzle - once you figure out what you're doing anyway, otherwise it explodes. And even though making things explode is funny after a while it gets frustrating having things continually blow up in your face."

Rhenarra yawns, getting up and stretching across the table. Evan chuckles before petting her.

"Why a tent? Well because it's cool! I mean, Sora's houses are pretty great, don't get me wrong, but they're not really wizard-y, you know? My actual house is down here."

Evan turns, making Rhenarra meow plaintively at the lack of petting, and points to a hole in the tarp covering the ground, where a trapdoor can be seen.

"It's a nice house, and I don't mind being underground. I mean, it's just as underground as the aquatic houses are so it was no big deal for Sora to make."

"Huh? Oh, Sora builds two kinds of houses; terrestrial and aquatic. One of 'em's pretty much just a normal one-story house, while the other has the floor scooped out down to basement level and flooded with water, so aquatic villagers can actually live up here on the island with no problems! It's not all water, I mean there's a platform and stuff for when they wanna just chill on land and for having visitors, but still, it's pretty awesome. Sora's great."

"Oh yeah, duh, hobbies. I play games and stuff with Aurora, Priya, Amun, and Kiara - they're my best friends. I'm not the greatest swimmer or anything but I am getting better!"

"Anyway, I gotta get these notes over to Brenna and Kahjah so they've got a good idea of what the weather'll be like tomorrow. Wanna come with and chat, or do you have your own things to do?"

Evan scoops up the papers on his desk, before looking at you expectantly. After a moment, you politely decline.

"Yeah, that makes sense. Hey, you should head into the forests beyond Tienyo's pasture, after you've played with all his animals and stuff, they're cute. But sometimes there's something weird over in there, or even in the village, and I can't really get a good look at it, which is super weird, you know? Like, something's blocking my sight but whenever we get to where it is there's nothing wrong there, even when I scry again right on the spot. The weirdness is still there but nothing’s out of the ordinary! And it’s not even just in secluded spots either - sometimes it’s right in the middle of a busy road, and other times the thing’s just straight up gone entirely! Like it never even existed!”

“Huh? Do we have any clues? Well, I mean Juniper's got his weird blurry picture of some big cat writing in a book, but no one knows who that is or how Ouroboros never noticed she was there. I mean, he knows literally everything that's on the island, from the tiniest acorn to Belphegor himself. You can't hide yourself from the spirit of the very land you're standing on, that's impossible! Even all my scrolls on magic say so, and they're super old!"

"So yeah, the weird thing’s back in the forest today if you wanna check that out. Otherwise, have fun sightseeing!"

With a wave, Evan exits the tent, Rhenarra jumping down to follow him out, leaving you alone. As you pull the tent flap aside and leave yourself, you mull over your options in your head. Keep exploring the town, or investigate this mystery in the forest. What to do, what to do...