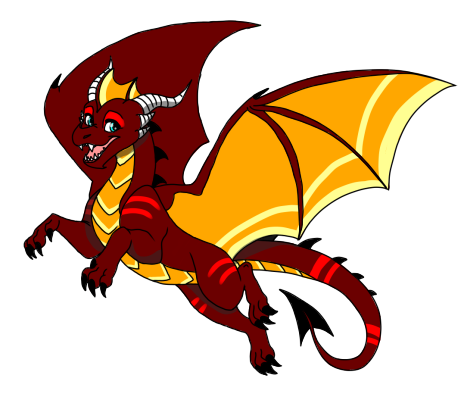 A black bunny partially wrapped in mummy bandages of all things skips out of a house, nearly running into you. With a quick apology, the rabbit excuses himself and bounds off elsewhere. As he unintentionally left the door open, you can see a red dragon hard at work at a table, strange artifacts sitting on the tablecloth. Curious, you make your way inside.

After standing for several seconds, you realize that the dragon hasn't noticed you. You clear your throat, but no response. Finally, you decide to tap his shoulder, which makes him jump and give you a startled look.

"Ah-! Sorry! I was just a bit absorbed in my work here. What brings you to my house?"

"Curiosity? Well, that's a thing to be encouraged, yes. Come on, sit down, don't think I didn't see you eying the artifacts on the table."

You do so, pulling up a chair before returning your attention to the dragon.

The spotted sneep gives him a puppy-eyed look, but the dragon doesn't waver. Hanging its head, the sneep reluctantly moves off the notebooks and scattered papers, where true to his word, the dragon starts giving the furry snake back scratches, which it clearly loves given the blissed out expression on its face.

"Right, now where were we? Oh! Where are my manners, my mother would be ashamed of me right now. My name is Zihao, the resident archeologist, and this fuzzy lump here is Sandy. Don't worry, he doesn't bite. Too lazy."

The dragon chuckles, shaking his head.

"Anyway, I'm working on some research from an ancient Egyptian dig site. Amun was just in here talking about what some of these were, it was quite fascinating. I never would have guessed how mundane some of these turned out to be."

"Ancient Egypt? It's not very well known, but it was a civilization that fell about a thousand years ago, give or take. You see, Furvilla used to be a vast desert, but over time the sands were taken over by forests and the ocean tides moved in closer until the land became what we know today. Quite fascinating, isn't it, how much geography can change in a relatively short period of time?"

"We - and by we I mean my colleagues and I - were at a dig in Olde Foxbury. The tomb was carved into the canyon wall, but it wasn't until and earthquake cut away part of the rock face that we were able to find it. And it was quite the tomb; it became quickly evident that this was the burial site of one of the pharaohs of old. Or so we thought."

"When we finally got to the burial room, we were quite surprised to see multiple sarcophagi all together. That doesn't normally happen, you see; the tomb is built for one person alone. So it was quite the surprise. Little did we know we had an even bigger one coming - when I opened up the lid of one of the caskets, I found to my surprise not a mummy, but a young jackal. Who then opened his eyes, making me scream in shock and terror, which made him start screaming his lungs out as well."

"Ah, that was sure something. At any rate, we found one other inside a sarcophagi - Amun. Yes, the very rabbit you just met on your way in."

Your jaw drops, completely blindsided by the news.

"And he's not the only one. His friend, Anubis, was the very jackal I found. You see, that was no tomb - it was a sealing chamber. A chamber of hope; to preserve the next generation of the pharaoh and his court through the calamity that destroyed their very civilization, so that they could rebuild Egypt anew. Unfortunately, there was no one left to wake them. And so they slept, until we found them, a millennium later. Quite the tale, isn't it?"

Zihao's expression once again turned somber, and the dragon sighed.

"Unfortunately, not all the sealing sarcophagi survived the test of time. Only Anubis and Amun made it through; the rest were cracked and broken, leaving naught but skeletons behind. It was rather heartbreaking, seeing the two children come to terms with their loss."

"Yes, you heard me right. Children. Anubis was once the prince of Egypt, and his friends were to be his high priests once he took the throne. But their nation is naught but dust, and the two were all alone in a strange world. So after doing our best to give the rest of the children a burial as close to what Anubis and Amun described as possible - mummifying skeletons is impossible, you see - I took the two home with me."

Zihao scowled, much to your surprise.

"As fascinating as the burial was, there is a time and a place for such things, and this was most certainly not it. Barret, one of my colleagues, dragged Ivan out of the room when he commented on how incredibly fascinating the proceedings were. Those two boys had lost enough; they didn't need even more heartbreak."

"At any rate, I ended up taking them home because Barret had five kids and felt he couldn't give the pair the attention they needed, as they were special needs in that they'd need adjusting to the modern world. Most of my other colleagues had no interest in children, being married to their work, and of course Ivan was out of the question. So that left me."

"Oh, don't worry, they're doing well. They're resilient cubs, and being in a place both familiar and completely foreign has done wonders in helping them heal."

"How is an island in the middle of the ocean familiar to desert-dwellers? Did you think that they never took a trip to the sea? The desert ran right to the ocean waves; there was greenery where the Nile was, of course, but the delta where it fed into the sea was incredibly important as well. As the next pharaoh, there was a lot Anubis needed to learn about the land and his people."

"Their gods? Quite intriguing, I must admit. I had no idea gods ran off a belief system, but in hindsight it makes sense, doesn't it?"

"Oh, a belief system is just that; the more believers and faith a god has, the stronger and more influential they are. But their strength dwindles as their followers do, and if they get to a point where their last believer stops believing, then they fade. The mechanics of a god's death..."

Zihao trails off, and gets a faraway look in his eyes. Cleary he has forgotten you were at the table. You clear your throat, and he immediately returns his attention to the present.

"Oh I'm sorry, I'm afraid my thoughts ran away with me. I apologize. That was rather rude of me."

"You want to know what my hobbies are? Well, aside from my work, I do enjoy puzzles, especially 3-D ones. They can be incredibly frustrating sometimes, especially if a piece breaks and renders the puzzle unsolvable, but they are incredibly rewarding in the end. Anubis enjoys the game as well; heck, that boy enjoys any form of game he can get his paws on."

“They’re both addicted to maple syrup. They drown everything in it, including things that should not be covered in maple syrup. Amun in particular is also completely in love with ice cream, which I honestly should have seen coming, while Anubis thinks pecans are the food of the gods. And don’t even get me started on the whipped cream.”

"My mother? I...the one I call mother was a red panda named Pikyu. She was the one who raised me until her unfortunate passing many decades ago. Dragons live a long time, you see, and it was inevitable that she would eventually leave me alone. That doesn't mean it still doesn't hurt all the same."

"Shiloh? Yes, of course. You think Ronan and his family are the only ones who pass messages to their departed loved ones? No, Anubis, Amun, and I do the same. Have you seen those kids on Halloween? All of them reunited as a court again, with Anubis and Amun introducing their friends and parents to the mechanics of the modern world. It’s still quite the heartwarming sight, especially since the departed can interact with the physical world on Halloween. I'm just grateful that Anubis - the god, not the child - is more willing to turn a blind eye to this."

"What, did you think Shiloh had free reign in taking people back and forth across the mortal coil?"

"Hardly. I know he has to work to sneak Helena out, whereas my god of the dead actively encourages Pikyu and I to meet. Praying to our ancestors and being visited by their spirits is part of the culture I was raised in, you see, and this isn't much different."

"As for my birth mother, she...used me as a distraction, a scapegoat before I was even born. She pretended my egg was another, and the great black dragon who was hunting her down for it killed us both, or so he thought. Pikyu had been with my birth mother just before, and found my egg had survived. She took me in, and has been my mother ever since."

"I understand her reasoning, I really do, and I've come to terms with what my birth mother has done, but...she could never be a mother to me. Not after that."

Zihao turned his head to look at the clock on his wall, before wincing.

"I'm afraid I'll have to cut this short. I still have work I need to finish and a paper to mail to one of my colleagues. Best of luck to your travels, and don't be a stranger! We don't bite."

Sandy raises his head, giving Zihao a look, who merely chuckles before returning to his work. You thank him for his time before getting up from the table and making your way out of his house.