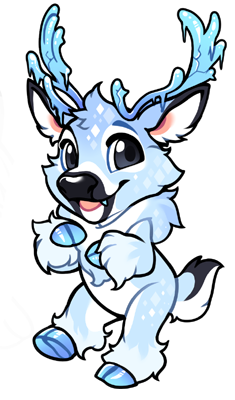 Its rather surprising to see a tropical island blanketed in snow; you know this is the workings of the resident spirit of winter, but that still doesn't change the surrealism of the sight.

In one of the yards of the houses, a little blue and white deer with literal ice antlers is happily building a snowman with a - oh dear, is that a firework ferret? With a kid? That has the potential to be a disaster.

At least based on the two other snowmen present in the yard, it's clear the kid's been at it for a while and not off launching fireworks. As you approach, he looks up from his snow sculpture and greets you.

"Oh, hi! I'm Tiberius, and my lil bunny friend is Cassius - Cassie for short. What about you?"

"Oh cool! I haven't seen many people other than my neighbors and stuff; I'm still too little to go exploring off the island."

The little deer beams at you.

Wait, what? Stunned, you ask him how that can be possible - he looks like a child, not an infant!

"Eheh. Weeeell...nature spirits don' age the same way mortals do. My momma and daddy are Arya and Or'boros, so I'm kinda a mix of spirits. What kind, you ask? I’m a New Year’s spirit! I’m new beginnings and wintry night and renewed land and all that! It’s fun!"

"Who's my godmother? Wykin! She made Sallentine, which is super cool cause its an entire world, like Furvilla! Daddy can't go see it cause he's stuck on the island which sucks, but momma and I can go. Wykin's really nice even if she's kinda weird sometimes, but without her momma and daddy woulda never met and that would be super bad cause then I wouldn't exist!"

"Hobbies? I love ice skating! And water games, those are super duper fun! I play with the other kids in the ocean aaaaaall the time, they're my best friends, all of them! Fireworks are awesome too, you shoot em up into the sky and they go BOOM, BOOM and there’s pretty colors everywhere! Froggies are epic too, Greenbean is the best and I love seeing all the little froggies that hop around the island. There's so many of them, cause we live in a place where froggies like to live. It's super cool."

Tiberius frowns, as though realizing something.

"Momma and daddy say not to wander off with strangers, so I gotta stay right here in our yard. But that's okay, cause momma's makin' it snow for Christmas and I'm building lots of snowmen, see?"

The little deer gestures at his mini army, a proud smile on his face.

"Oh yeah! Do you wanna build some with me? Our yard is big, so we can make lots of them! And it's super fun! Pleeeeaaase?"

Well...how can you say no to that? With Tiberius cheering next to you, you start gathering snow to add to the incomplete snowman. It wouldn't be incomplete for long, that was for sure. Tiberius had brought out boxes of decorations for them too; ornaments, holly, and tinsel could be seen among the traditional buttons and carrots. And you had just the idea for those.