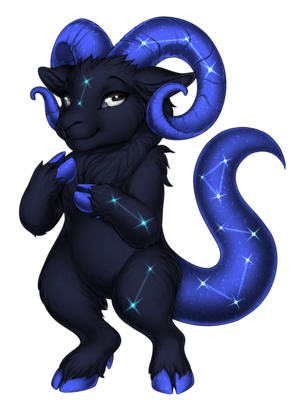 
As you approach the village training grounds, you see a starry sheep sitting on one of the benches, spear leaned against her seat as she guzzled down some water. Clearly, she had just been working hard here. At your approach, she looks over at you before capping the water bottle and putting it away. A happy bark from a baby void beast draws your attention briefly to where the alien pup is digging holes in the dirt, before you return it to the sheep.

"Ah, a visitor I see. It appears we have that in common. My name is Astraea, and the little one is Capricorn. It's a pleasure to meet you."

"What do I mean? Well, I'm from the stars. If you've met Nocturne, then you know that the heavens are populated with living stars, constellations, galaxy villagers, and more."

Astraea smirks at you.

"What am I? Well, I'm a star guardian. My job is to make sure the various people in the heavens are safe. Monsters aren't just limited to the earth - there are quite terrifying beasts that roam the skies. Shadows and wyrms and other unholy things. Just like each village has its own warriors to defend it, so too does the heavens."

"You mean what species I am, aside from being a sheep? Ah, well, I'm just a sheep. I'm no living star or anything, but one of the people living up in the skies. As I said, there's more than just stars and galaxy villagers up there, though we do tend to be heaven-themed. I mean, we are up in the stars after all."

"I live in one of the major cities, Novarra's Tower, just on the banks of the Darkened River. Despite the name it's actually more of a mercantile place than anything. A lot of the materials that can be found in Quetzal Palace, such as stardust and meteorites, can be found in the heavens too. Which makes sense; Quetzal Palace lies in the skies too, though much lower down. Until the Serpent decides it wants to fly through the heavens, in which case both Quetzal Palace villagers and villagers living in the heavens can intermingle. It's quite fun, actually. Lots of trade gets done during that time - Novarra's Tower certainly gets pretty busy with all the new merchants and tourists setting up shop. Not to mention the other cities - it all depends on when and where the Serpent breaks through the heavens."

"Am I here for Nocturne? Well, no actually. There's nothing to worry about here, and Nocturne has no desire to go gallivanting off into the earthly battlefields. Otherwise yes, I would."

"Personally, I like the cooking here. And not just here, but other places on the continent of Furvilla and beyond. I indulge myself on occasion and come down to eat out."

"Oh? You want to hear stories of the monsters and such I've fought?"

"Very well. Take a seat; what I have to tell isn't a short story."

You immediately sit down on the bench next to her, giving Astraea your full attention.

"Now, let's see...ah, I know where to start. When I was but a young greenhorn, the garrison I was stationed in was out training in the outskirts of the Great Dark Beyond - that's the dark places between stars, you see, their places of rest are spaced quite far apart. Since it's our job to guard the sleeping stars, our superior officer decided to get us out for our first taste of real combat. Little did we know that we'd accidentally bitten off more than we could chew..."