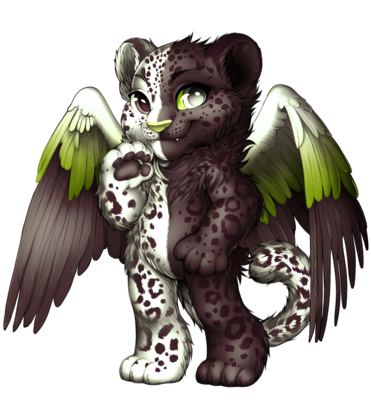 
To your surprise, you see a two-toned, winged snow leopard entering her coral-wood house. Curious, especially as she'd been carrying stacks and stacks of colored paper, you approach her door and knock.

"Oh! One minute, lemme put this down!"

The door opens, and the snow leopard is standing in front of you.

"Hi. Are you a new neighbor? The name's Evergreen, nice to meet'cha!"

"Oh, you're not? Eheh, whoops. Well, come in, come in. You're probably hot and thirsty, aren't you?"

Following Evergreen inside her house, she ushers you to take a seat at a small dining table before bustling off into the kitchen, returning with two cans of Tiger's Eye Dew.

"Here, go ahead. Anyway, I'm Evergreen, and as you've probably guessed from all the origami and stuff around my face, I fold paper and stuff as a hobby."

Evergreen looks a bit sheepish at that, but also proud. There's paper creations everywhere - everything from fortune-tellers to mobiles to origami, and even a few jars filled with paper stars.

"What else do I do? Uh, nothing. Well, I mean, I babysit the kids when the adults can't, so I mean, that's something. But uh, yeah. Bram and I get along in that - he'll sit in his library making candles, and I'll sit next to him folding paper. It's a surprisingly nice bonding activity, you know? I never would've thought it was until we did it. You should try doing something quiet with a friend or sibling, like reading side by side or something. It's nice."

"Anyway, did you bring any littles with you on your trip? Cause if you did, I can watch them for you for a while. Free of charge, we help each other out around here. Heck, the only currency that really matters in town are the town tokens, and even then, they're not used to buy anything. Just make costumes."

Evergreen puffs herself up in pride.

"It's the village specialty, you know. We run a mail-order [url=https://www.furvilla.com/forums/thread/107128-ouroboros-costume-shop]costume shop[/ur], It's a group effort, really - everyone from every career pitches in, you know? Can't make the things without stuff from warriors, explorers, and crafters, you know? And then of course there's the tailors to actually make the things. Wouldn't get anywhere without a tailor, of course!"

The snow leopard giggles in amusement.

"So yeah. Everyone has a part to play. Like Pikabolt and Tienyo - they run the pasture over by the edge of town, where Ouroboros meets the trees. They've got all kinds of cool little guys to keep you company."

"Huh? Oh, this is my scrollie! And yes, his name is Scrollie; so creative, I know, but he wouldn’t respond to anything else I came up with - and believe me, I came up with a lot. Anyway, he really likes recording things - recipes, origami, any and all books he can get ahold of, freaking binary even - if it can be written down, he’s got it.”"

"You should see Bram chasing him down when he learns Scrollie has something new! It’s hilarious!”

After a minute, Evergreen’s chuckles subside.

“Ahhh. Oh, but look at me, already taking up so much of your time just jabbering my head off. Oh! Take this, I've got plenty of them, and you can have it as a souvenir!"

The snow leopard plucks a glass jar from one of the shelves, placing it gently in your hands. Inside is a rock with a fake mossy carpeting, and an origami crane standing tall and proud on the rock in the middle.

"Don't worry, it won't fall over! I glued it, see. But anyway, hope you like it! Maybe I'll see you around later."

Saying your farewells with a smile, you leave Evergreen's house behind, the glass jar cradled in your hands. It really was a nice souvenir; it’d make a good display in your house, you think. You just had to make sure it got there first without getting broken!