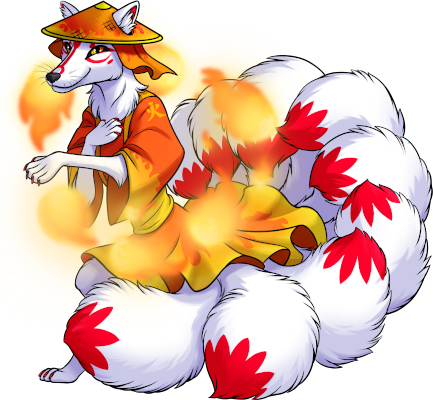 Aava is infected with Lycanthropy. Changes into a beastly monster after exposure to moonlight or especially frustrating board games. Howling at the moon relieves the symptoms for a little while, but use a Golden Apple for best results.

Name: Aava
Age: 92 (Former Life: 18)
Career: Sculptor
Favorite Color(s): sea green
Likes: making things with her hands, games, playing with magic, animals, sea glass, and playing tricks
Dislikes: anything with large pincers, being sick, being trapped, grooming all nine of her tails, and vinegar
Favorite Food: Fabulous Fruitcake
Hated Food: Deep Fried Cowboy Boot (don’t ask how and why she tried one…)
Other: Demons can eat whatever they please

The sound of humming and bubbling water catches your attention, drawing your gaze across the street to the sight of a white nine-tailed fox running a narrow tool across a dinosaur sculpture in her paws, adding texture to what you now realize is depicting leathery skin. An elaborate fountain sits in her front yard, on the opposite side of a large kiln, in which a golden koi happily splashes about. After a moment, the kitsune notices you, and sets her creation down to give you her full attention.

“Oh, hello. Who are you? I wasn’t aware we had any new people moving in…”

The kitsune laughs sheepishly, making a gesture with her clay-encrusted paws. You can’t help but let out a chuckle as well, before asking her if this is her hobby.

“Yep! My hobby and my job, I guess you could say. I make a pretty penny off selling these little things.”

“No, that doesn’t sound quite right…”

“Am I foreign? I, well, I guess you could say that…you’ve met Xino, Ephemera, and Morgan, right? We’re all reincarnated humans - or proto-furries, as you’d know them. That’s where the phrase comes from - our world.”

“Yes, our world. Furvilla is so very different from the world we knew, and yet so much is the same. Kind of funny, isn’t it, that two different worlds can still be so similar.”

“What? Oh no, this wasn’t intentional at all! All we did was die, except apparently we’re terrible at it because we ended up being reborn here instead of ending up in the afterlife like we should’ve been.”

“Huh? Oh yeah, I guess you could say I’m the oldest. Not in our human lives, mind you, but you’re right that kitsune only get their ninth tail once we reach 100 years of age. Or, well, that’s how it’s supposed to go anyway. I’m only 92 after all.”

Your jaw drops. How was that even possible?! Aava chuckles at your expression, eyes sparkling with amusement.

“Haha, yeah. But then, since when have I ever been normal?”

“Normally, kitsune are born with two tails, and as we age, gain one after another till we hit nine. That’s when our fur turns white, and our magical abilities skyrocket. As for me, though…I was born with three, not two.”

“Touma and I think it’s because of my previous life. It’s around the same timeframe as a single tail, so it fits. Not like we have any better ideas.”

“Touma? Oh, he’s one of my childhood friends. He’s an inugami, and yes, I know what you’re about to say. And it’s true, kitsune absolutely despise dogs, and vice versa, but we’ve already established I’m not a normal kitsune. I like dogs, had one in my life before. Don’t get me wrong, I’m still very much a yokai, but when it comes to conflicts between demonic instincts and human nature the latter wins out, which I’m grateful for. It was hard enough adjusting to no longer being human, but being a demon to boot. At least I came back as a yokai; I don’t know what I would’ve done if I’d been reborn as a ‘normal’ demon like Belphegor…”

“My name? Oh no, I didn’t change it, not like Xino and Ephemera did. To them, their human names are precious, priceless. Something private. For Morgan and I though, they’re our links to what we once were. Reminders that we’re the same.”

Aava looks up at you and smiles.

“How did I die? I, well…I was stabbed. Multiple times, in the heart.”

Aava presses her paw against her kimono, over her heart, where the death scars no doubt lie.

“It’s, they’re under my fur, so its easy to miss, but if you push it aside, well. They can’t really be mistaken for anything else.”

“Itachi? Yeah, I know him, annoying butthole. Do you know how infuriating it is to be tripped while you’re carrying fragile pottery? Ugh!”

Despite the complaining, however, Aava sounds fond.

“There’s another yokai on the island too, or, well, soon to be one.”

Aava chuckles at your look of surprise, before pointing to the fountain containing the koi.

“That’s Chinatsu, and she dreams of becoming a dragon. You’ve heard the tale before, a carp who swims up a waterfall and becomes a dragon? It’s a little more complicated than that, but it’s true. And one day, I hope to be there when she realizes that dream.”

“Any other demons…? Well, I mean, Touma visits a lot, but there’s also Yuri, he’s a Yatagarasu, and also my battle buddy. We work as a team, he and I, and a formidable one at that.”

“What, surprised? I’m not a warrior proper, but I do enjoy taking to the battlefields every now and then. I’m a kitsune; do you honestly expect me not to want to cause mischief with my magic?”

Aava smirks at you.

“I may be a human in demon skin, but I am still very much a nine-tailed fox.”

“Now, I’m sorry, but I really do need to get this finished before the clay dries out. Do stop by to talk later, though. We can even spar in the training grounds if you so desire; it’ll be nice to have a fresh challenge in the ring. One who doesn’t yet know my tricks.”

And with that, the kitsune returns her attention to adding texture to her clay sculpture, looking away from you in clear dismissal. Perhaps you should check out the souvenir shop you passed by earlier; maybe some of her sculptures would be on display there. It would be nice to see finished examples of her art. Who knows, maybe you’ll take one home with you.