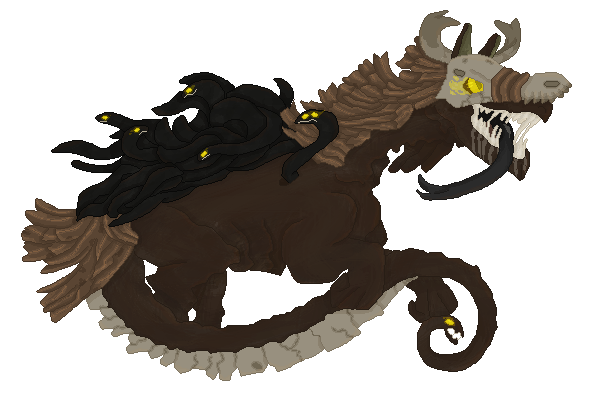 Subject 42, a monster, a shadow shapeshifter. Long ago he knew the reason why his name was 42 and why he is afflicted with such a strong hunger. He spends all his time hunting and eating.
He knows he can not die, due to the many battles that left him crushed, his white blood covering the ground. He will always get back up, no matter what battle he is sent into.

He hates the light, and how it burns at his skin whenever he is in it. He sticks to the shadows, knowing he will heal as long as he stays in them.

With the right amount of meat, he can be kept from thinking you are prey but that doesn't mean he will trust just anyone who offers him meat. Be careful, and be ready to fight for your life.

( 42 is my oldest alive oc! this form of his is his new just for furvilla form! It takes parts from Monsters you can already fight as well as ideas from his other forms.
His name is not really connected to the The Hitchhiker's Guide to the Galaxy but seeing as he dies all the time perhaps there is some meaning to it.
Other than that he is my own species as well! One of a kind even if hes just an immortal shadow shifter whos overpowered (not in furvilla though since i barely do anything with the warrior stuff)