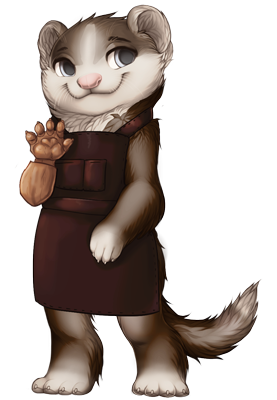 Crystal came from a very forgiving family who would spoil her very much. They would give her anything she wants, but she felt like she was suffocating with her parents always around her. She told them that she would move out with her friend Phoebe, and her parents understood and allowed her. They then moved to Quetzal Palace.
She now works as a blacksmith, and she loves doing so despite being slightly clumsy. She lost her arm in an accident when first starting out as a blacksmith, but she replaced it with a wooden arm. Her parents would often send her mail, asking how she's doing. She lives with Phoebe.

Very chatty and loves talking, especially while making weapons. Often talks to herself. A huge dork who likes lame stuff like anime. A bit clumsy at times.