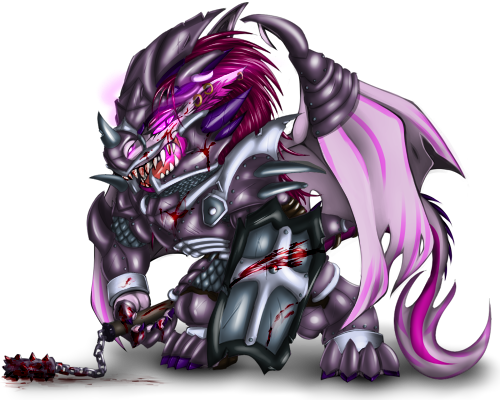 " During the full moon, I gaze upon my fallen enemies, and watch as their blood changes color in the bright moonlight. All of it turns black. It shines like black diamonds. Beautiful. "
-Lady Faralyn-

Born to a wealthy, aristocrat family, she never quite fit in, other than by her inherited, gorgeous looks. Where everyone in her family was focusing on "fine arts" and other "meaningless idiocy" (as Faralyn calls it), she was busy sneaking out of their family manor and picking fights with other kids. Her sisters went to seek wealthy mates and occupied themselves with careers of acting, dancing and "otherwise wasting everyone's time" (again, Faralyn's words), she hired a personal trainer to teach her to fight. When she was old enough, she bought a run-down rusty armor and an old sword, and set to the woods. Naturally, she nearly died a few times immediately. Kheg, the Velociraptor was there to drag her out, with his friend Snektar Von Slithersteen. She befriended the duo and eventually met a blacksmith by the name Mr.Shinyscales.Jr (she laughed at his face the first time they introduced themselves). With his help, she got proper gear and slowly built a very successful career as a warrior. But she felt she could be stronger, and remained unhappy.

Lady Faralyn was one day given a choice by her friend, Snektar. Snektar knew a certain, ancient individual who could give her more power. Immense strength and endurance in the battlefield. All at the cost of her graceful form and beauty. Needles to say, Lady Faralyn agreed to the conditions immediately.

And she has not regretted that decision at all!

She now hulks over the battlefields, leaving destruction in her wake. Such is her rage, her vigor, her relentlessness in battle, that it's best to leave a safe distance between yourself and her, even if you all have a common cause. Just in case.

Lady Faralyn also makes Mr.Shinyscales Jr, her go-to smith and friend, work even harder with the rate she breaks her own weapons while bashing unfortunate creatures into smithereens. Not to mention the effort to custom make an armor for someone her size!

Somehow, all of this new power and the fact that she has slain over thousand monsters have made her very content and happy. After battle, she is very calm, relaxed and outgoing. This is especially true to Kheg, whom she has made her unofficial Squire.

Lately, she has taken under her wing a stray kobold, Margador , whom she saved from the clutches of a Tormented. Impressed by the spirit of the kobold, she trained the little warrior in the ways of combat (nearly killing him in the process, accidentally of course! ), and now shares the action with him on a daily basis. The two share stories, and get along marvelously.

While she never liked her aristocrat sisters and their vanity and greed, she now spends more time with them, uninvited of course. Faralyn seems to find it amusing to no end that her form causes such discomfort and anxiety among the "elite". She even dresses formal-like, and now has a habit of adamantly demanding her to be called "Lady", despite her previous hatred for it.

She thinks she has her life going the way she wants, and you rarely see her without a smile these days. Unless she is listening to another one of Mr.Shinyscale's puns!