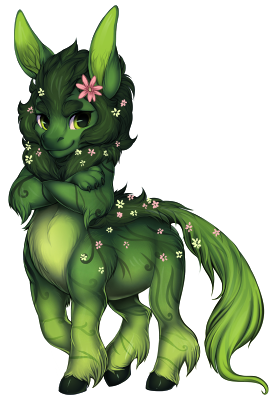 *You were looking around the beautiful, fancy room when an odd looking Sagittari walks in. Her eyes widen and she freezes, staring at you. You mumble an explanation about how you had been talking to Tyler and Rocket earlier, and she brightens up immediately* Oh! Okay then, well if they talk to you then why shouldn't I? You seem nice, hi I'm Auburn! *She says very quickly, making your eyes widen, but you shake it off. You look at the flowers all over her, tilting your head slightly as you wonder why they are there. She follows your gaze and looks down at herself, looking at the flowers* Ooh, do you want to know how I got them? Of course you do, we're friends now! *She says super quickly before clearing her throat*

Well, I was out watering our garden, when suddenly my friend's white cloudog, Marshmallow, ran into the woods. Suprised, I ran after him with my watering can still in my hand. I called his names a bunch of times, but I was hopelessly lost in the woods. I slumped down on a tree, about to cry, when suddenly I saw a little bit of light, but it was kind of red. So I followed it to a shriveled up little rose. I was suprised it was even growing in the first place! I realized I still had my watering can and I poured the rest of it on the rose, which immediately bloomed into the most beautiful thing I'd ever seen! But, it was odd. Roses aren't supposed to bloom that quickly...I reached out and gently touched one of the petals, which was completely dry and felt like it was beating, like a heart. I bent down and looked at the thorns, which were huge. I tried to part the leaves to get a closer look, and I cut myself on the finger and jumped back. I suddenly got a little dizzy and leaned up against a tree. Once I felt better, I turned and saw that the entire rose bush was gone, there was nothing there except my watering can. I bent down to pick it up and I saw that my paws looked different, a different color. I looked at myself and I saw a bunch of tiny flowers, all over me. Wide eyed, I looked around and I saw that I was back in the garden. I looked completely different, and my plants looked more beautiful than ever. Marshmallow was sitting on the porch happily...and I was the most confused I had ever been in my life. *She finishes, touching the pretty flowers* You probably don't believe me, but it happened. I don't lie...*She says kind of quietly before looking back up at you with a smile* Well, it's nice to meet you! Goodbye.

Roleplays- Open, but only for four villager ones. She doesn't do single Roleplays

(Warning, Auburn is a major chatty Cathy. One of her quirks is that she refuses to talk to strangers until one of her best friends has. She also won't go swimming on Tuesdays)

(See how she became a Sagittari on Briar's story)