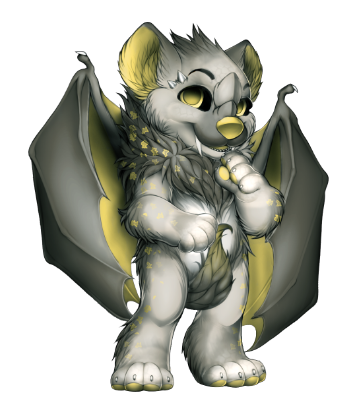 +he or they, sometimes okay with she
+twenty-four
+bisexual
+dracrocuta (dragon/hyena hybrid)
+can breathe fire; blue + hot
+eats coins/gems even if they arent his; esp. if they arent his
+laughs at inopportune times
+his own number one fan
+can bench you
+probably skips leg day
+often has his wings dragging against the ground like a savage
+oral fixation

Wyrr comes off as extremely playful, perhaps even a little bit mischievous; their interactions and intentions don't always seem to be completely selfless in nature. Others seem to enjoy him on a shallow basis; first meetings, brief conversations; he can be very passionate and sweet, attentive and playful. He's romantic in his ideals, bubbly, and both blissfully ignorant and charmingly awkward. When it comes down to it, Wyrr is a simple creature, one who's won over by small acts(and food), and almost painfully loyal when he chooses to be.

(And while he is one to completely toot his own horn, he's not lying when he says his humor is one of a kind; feel free to take that as you will.)

But it's often when others stick around Wyrr starts to be too much; a little too impulsive, a little too loud, and a bit too nosey. Suddenly his colourful personality becomes too vibrant, his laughing annoying, and his vying for attention reeks of desperation. As a result Wyrr is used to being alone and often struggles to keep relationships strong between the few friends he does have.

He can often be found on the outskirts of Tigereye Peak, idling his time away by testing both his strength and prowess against the lurking monsters.