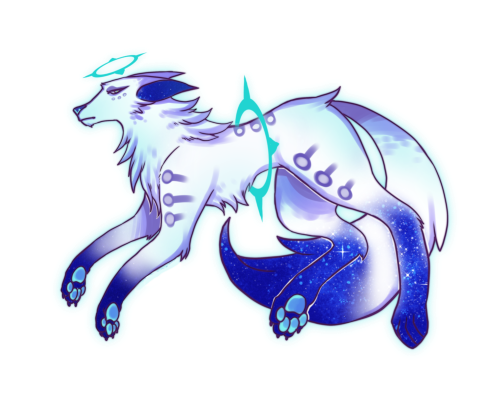 Myriad seems to be benevolent, but quiet and strict. Their voice is a mix of a a beautiful woman's and a handsome man's, though their mouth never moves when they speak. However, hearing them speak is normally rare, as they will usually keep silent until the need for their voice arises. It appears as though, for the people of the varying villages, they will put their normal behavior aside.
~~~~~~~~~~~♥~~~~~~~~~~~
Myriad's Relationships
Significant other: None; single

Legion - Myriad is not fond of Legion and does not speak of it highly, provided they speak of it at all.

Nebula Deluge - Nebula is Myriad's confidant and best friend. While the two rarely see each other, they are extremely close.
~~~~~~~~~~~♥~~~~~~~~~~~
Theme song: TBA
Adopted from Hekmatyar 1/18/2016; original name Svätožiara
Note to everyone: The language at the top of Myriad's profile is not a real language; it is the fictional Chaos Language, made by Emi Evans, and therefore what is up there has no translation. It cannot have any meaning, good or bad, inappropriate or otherwise.