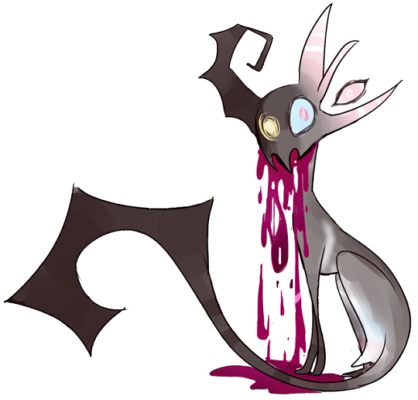 "I tried to walk together
But the night was growing dark
Thought you were beside me
But I reached and you were gone
Sometimes I hear you calling
From some lost and distant shore
I hear you crying softly for the way it was before"
~~~~~~~~~~~♥~~~~~~~~~~~
//Legion//genderless//(it/its)//6'05"//
//Amalgamation//aromantic//asexual//Reaper//
~~~~~~~~~~~♥~~~~~~~~~~~
"dear child: stop working! go play! there's no fear in a dream."
Legion is an amalgamation of souls. Specifically, it is the amalgamation of the souls of children who died unjustly - those who died to abuse, murder, preventable illness, et cetera. Its voice isn't just one voice, but the voices of all the children its consumed; as such, it is neither male or nor female, nor both. It sounds like many children speaking at at once.

It is a kind creature, very caring and loving. It wants nothing to do with those who haven't died, loves playing with children - provided the children who can see them are healthy, as usually only children who are on the brink of death can see it - and it gets its thrills out of enacting revenge on whoever or whatever killed a child within it.

Some people have come to believe that Legion simply takes the souls of the children, when this is not true. No... every soul within Legion is willing, had been asked if they wished to join it, and if they said no, Legion simply stayed by their side until they passed, ever a vigilant watcher to make sure their death was as peaceful as possible.

Legion seems to have a secondary form, though how to unlock it has yet to be found out...
~~~~~~~~~~~♥~~~~~~~~~~~
Legion's Relationships
Significant other: None. It is uninterested in romantic relationships.