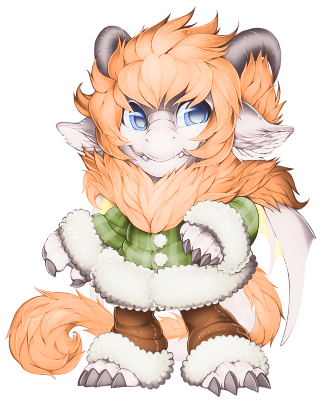 Ciel is infected with Vampirism. Symptoms include craving blood, sensitivity to sunlight, an allergy to garlic, and changing into a bat after especially forceful sneezes. If they start to sparkle, immediately consume a Golden Apple to cure the infection.

Deep within the forest on the southern border of Dragonsmaw Manor, there lies a secluded, very well hidden glade. This glade is home to few creatures, primarily mini-pets and monsters.

In the deepest part of the glade, which few have seen and fewer been allowed to tell the tale of seeing it. This sector of the glade is home to faeries and faeries alone. No monsters live amongst the fae, and even they know to leave the faeries alone.

The faeries rarely leave the glade, and only do so for two reasons and two reasons alone; those reasons being to become companions to the villagers of Olde Foxbury, or, once a year, to spread their gifts and cheer around all villages, during the Snow Festival.

Ciel is a faerie who lives in this glade, and thanks to a special being. he has been gifted an anthropomorphic form. This form is of a fluffy dragon, and he looks just about the same as he does as a faerie, minus the glow they always emit.

Ciel is shy and considerate upon first meeting, but as time goes on and he gets used to the presence of those he's met, he slowly becomes more confident.

Ciel's Relationships
Lyric - A saggitari that Ciel met not too long ago, but is incredibly fond of. He may or may not also have romantic interest in Lyric, but he's pretty damn sure that, even if it was requited, it would never work. Lyric is Ciel's romantic interest.