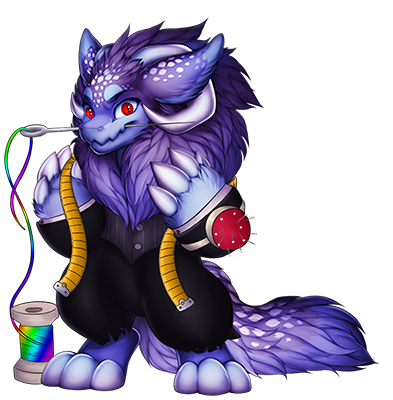 FurVilla Evolution:
> “I'm -not- a scavenger, you know. Just very picky about what I eat.“

“I'm a gourmet who craves to enjoy. The perfect meal is worth an eternity of waiting for...“
> “I thought this new body would be an inconvenience, but it is surprisingly useful indeed.“

Status: Alive (we think...)
Family: N/A
Romance: Does stalking someone to consume their soul count?

A predator of highest aesthetics, Sebastian will do whatever it takes to obtain the meal he set his eyes on. Formerly a velociraptor without name, he had always been a picky sophisticated predator, with his meals well chosen, even if it meant to go hungry for a while. To him, hunting and finding the perfect prey was an art form. Feeding on the ill and the weak? Anyone could do that, but his goal was to find the prime amidst the easily accessible food before him. His search for the perfect meal often had him wander for days, and some consider it a miracle that he was able hunt, much less survive, on having an empty stomach ever so often. Even territories that appear rather hostile for a reptilian (such as glacier deserts) have been traversed on his quest for ultimate culinary satisfaction.

Exploration
However, more often than not he finds himself returning to the forests, for just because a prey was rare it wasn't necessarily tasty, and areas flourishing with life were more likely to provide the tongue teaser he was looking for. He couldn't believe his eyes when he saw a massive dragon thrashing through his forest. It had been severely injured, leaving a trail of blood, but was also blindly enraged, destroying whatever lay in its wake. The blood in particular had an enthralling scent to him, and when he deemed the distance safe, he decided to take a sip from the pool that had formed near him. The first taste was too much. Astounded and sensory overwhelmed, he tried again and again, each time exploring a different aspect of the flavour.

Fighting
It was time to go for the kill. This massive raging meat was his to claim, and he couldn't wait to sink his fangs and teeth into this prey. He began to salivate as he imagined the cracking of bones and tearing of muscle flesh. Today, he would feast like he hadn't in a while, or quite possibly not ever before. His pride as gourmet predator was at steak stake here! However, this was a dangerous undertaking, no less because this blind rage was accompanied by plenty raw power. One wrong move and he'd turn into his prey's prey instead!

Their battle was long and hard, and ultimately there was no victor. Both of them slumped down back to back, heavily bleeding. Perhaps due to the loss of blood, the dragon's rage had ended, and as they sat there on the forest floor, both burst out in laughter of how almost comedically absurd this situation was. They conversed for a while, until the dragon, named Kijame, decided to be on her way home. The velociraptor kept following her ('like a puppy', she exclaimed), and when she stopped to ask him why, he bluntly replied that he wanted to eat her. After a bit of back and forth she let him have his way and follow her, concluding that currently he was no bigger threat to her than she to him. And for some reason she couldn't get the mental image of a puppy out of her head...

Carpentry
Before long, they arrived in Ryû, and the velociraptor eagerly explored this new venue. Between his announced assassination attempts on the village leader, he was scouting around. The remains of what seemed to have been some sort of magic and potion building seemed to enchant him, and he carelessly entered, knocking over an ancient bottle and was promptly transformed into a new, more demonic creature. With this transformation, his hunger for flesh was replaced with a hunger for souls, but his culinary aesthetic remained.

Aside from this internal change however, he found it a blessing to have powerful arms and paws, and decided to make himself useful in the village by becoming a carpenter, as this was a taxing work requiring physical fitness, but also left room for expressing the finer arts if one were to treat every building constructed as artistic masterpiece. Before he knew it he pulled up houses, stables and the like one after another. While it took the others a while to get used to him and to his new look, they agreed without a doubt that he was a handy addition to the village.

Need a Carpenter? Sebastian's here to help! He will.repair your Pots, Stables and Houses! Just visit his career to restore building durability points! Or do you need any one of these built? Send the wood needed and he'll be on his way!

Tailoring
Whenever he was done constructing, he'd follow Kijame around like a puppy, which she found endearing at first (as she somehow couldn't take this “I want to consume your soul“ business seriously), but eventually tired of. She told him to try and keep himself busy so he'd stay out of her way, and he complied. One of his tours had led him into what he believed to be a tailor's shop, and he had studied the techniques and patterns in books he located there. His first attempt was a Swallowtail Coat, which he proudly donned.

The leader laughed, asking him if he were the 'butler Sebastian' now (because Sebastian and James were the butler names she'd heard most often), and he in turn adopted that name and mindset. While his first coat was flimsy and not very refined, he has since improved his skills, making the finest clothing in all of Ryû. Imperfection goes against his aesthetics! Rather than trying to kill her for his meal now, it seems that he'll wait on her to death, fulfilling every order from her with a cheeky “As you wish.“ As a demonic being, he seemed to have all the time in the world to do it...

Need a Tailor? Sebastian's here to help! Just provide the material the recipe asks for and he'll sew it for you. No extra costs!

Willingly obeys her for his own reasons.

Loves to agitate. It's too easy!

They don't really have much to do with one another.

Adores the fur but keeps his distance.

Never formed an opinion about her.

Could be a partner in crime but isn't evil enough.

Ponders if she is worth eating but never got a chance to taste.

They get along, strangely enough.

Kitty! And a tailor, but her work lacks finesse.

Maybe, given enough time, he too can be a tasty treat.