It is time for the Serpent Festival!

Hello everyone! I am excited to announce the beginning of our 2020 Quetzal Palace Serpent Festival!

The Serpent has landed on the mainland and is ready for your offerings. This ancient beast is one of the last remaining from the old times, before written history, before the villages came together in a global economy and named themselves, collectively, Furvilla. The Serpent is where the villagers of Quetzal Palace have made their town, and its constant movement allows them travel across the entire Furvillian continent!

As a special surprise, we've decided to run this year's festival for three weeks, instead of our usual two.

The festival begins today, March 23rd and will run until 11:59pm on April 13th. The Serpent will only accept offerings during this time frame.

The Gala Ball, where you may trade your serpent feathers for fabulous prizes, will open on March 30th and close on April 20th at 11:59pm.

Now, let's get on with the festivities!

Offerings to the Serpent

As in previous years, the Serpent demands tribute, and will provide feathers in exchange for the items it seeks. These feathers will be used as currency during the Gala Ball's prize shop when it opens next week. This year, the Serpent has several specific demands, which you may clearly see on its donation page. 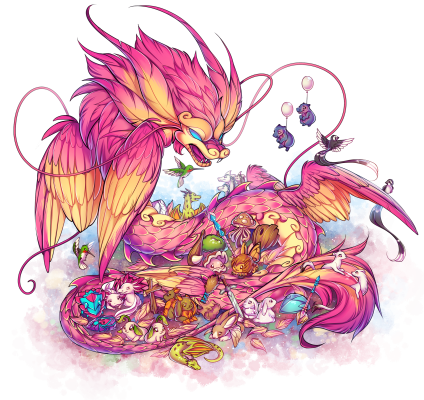 To obtain items the Serpent seeks, you will be calling upon the assistance of the majority of your villagers, as most careers have something to contribute.

The below redeemable code will provide you with five new recipes.

Crafters, Alchemists, Tailors, Blacksmiths, and Cooks will craft the above recipes. Each time a recipe is crafted, a basic item is guaranteed to drop. Occasionally, a rarer (and more powerful) version of this item will drop as a bonus in addition to the base item. The Serpent will award more feathers for rarer items.

Don't be shy about donating these items to the Serpent during the festival! Your villagers may continue to craft the above items forever, but be advised the Serpent is picky and will not accept these items next year.

Should you find yourself in need of more recipes for the above items, your Explorers can help! While exploring, your villager will encounter a special explore event. In this event, you may meet some surprising versions of Quetzal Palace's rarest creatures. You may pick up an extra recipe or a special magical stone!

Your Warriors may wish to help your cause by heading off to the Serpent Battlegrounds to spar with various elemental minions and the Serpent itself! This battleground will challenge your fiercest Warriors as well as provide you with extra crafting items needed to appease the Serpent.

The fluffiest of animals!

Villagers who know the Animal Husbandry career may contribute as well!

Below you will find a link for complimentary special cloud pets, which are able to breed quite often throughout the festival. The Serpent seems to be quite fond of rare and super rare versions of these cloud pets, so start breeding! These pets have a cooldown of 1 day.

As an added bonus, for the duration of the festival, your daily breeding turns have been increased to 100!

Should you wish for more common pets to jump-start your breeding endeavors, you may trade leaves with Warren for common-color rarities in the Cottage Shoppe.

All rarities of these cloud pets will also be available for purchase at the Gala Ball.

- This year's festival will last for 3 weeks. It starts now and will end on April 13th at 11:59pm.
- The Serpent displays a list of the items it is seeking on its donation page. Your villagers will work together to craft these items. The Serpent will not accept these items next year.
- Visit the Serpent Battlegrounds to pick up extra crafting materials.
- A special explore event will drop extra recipes and magical stones.
- Animal Husbandry daily breeding turns have increased to 100 for the duration of the festival.
- Special event cloud pets may breed during the festival and have a 1 day cooldown.
- Trade leaves with Warren in the Cottage Shoppe for more basic cloud pets!
- Feathers are used as currency at the Gala Ball, so save them up!
- The Gala Ball and festival shop will open on March 30th and close on April 20th at 11:59pm. We will have another news post with more Ball information when it opens.

Enjoy the fun, and please appease the Serpent. It has been waiting all year for your tribute.