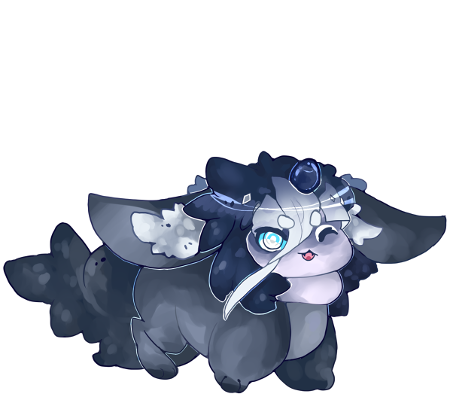 Even something fragile can become a force of greatness!
Zenith Frostgale, aka Winter Solstice/Midwinter

"Winter Solstice" is actually a title given to this special Chunibo. Every year, only on the day that marks the longest night and shortest day, are they able to draw upon magic from their surroundings and channel this energy into them, attaining "divinity". In fact, this magic is so powerful to channel through a single half-horn that the magic deforms the horn to take on a physical shape.

On this night, fellow Chunibo have no need to worry as the magic aura created by the Winter Solstice forms a protective shield that wards off lurking Bushi. Most Chunibo villagers stay awake during winter solstice since it is much safer to go exploring. Scouts venture towards the forests to gather rare night berries that can be collected only at night; Knights, who would usually be on sentinel duty, dozed off cozily without worries, and the young Chunibos playfully crowd around Winter Solstice, poking curiously at their horn.

On any ordinary day, Winter Solstice is known as "Midwinter". This name was given to them for the reason that they had been born in midwinter. That night, the threat of the Bushi was high and the villagers were anxious. Midwinter was born small and fragile, but the Solstice gave them strength. As soon as Midwinter came into being, every Bushi dispersed or retreated back into their dens. Thus, the title "Winter Solstice" was given.

Chunirolls and paintie made by Piyo !
Both the 'normal' and 'powered up'
forms can be found in the wardrobe!