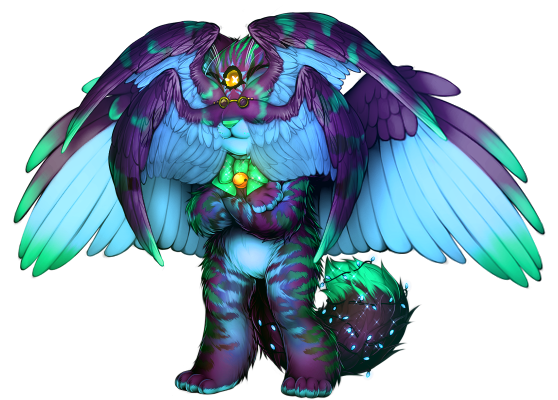 Ollie no longer has a house! They will be unable to work. Please replace the house or move Ollie into a FC slot.

Ollie was a normal cat. He had many hobbies, including sewing, sparring with Typheus, reading, and generally offering help where he could. He loved reading and sleeping and purring by the fire, and was also the clan Maroonian's chef (you could never trust anything Atropos cooked. Who knows what kind of things would end up in that food).

Then he used a plushie. So he became a Bell Cat.

That'd be all fine and dandy, but the plush he used... well. Let's just say it had been oozing a weird tarry viscous substance from it's mouth and speaking in tongues, with quite a number of fathers sticking to its body.

Needless to say, Ollie should've exercised some caution in his decisions. But Ollie was always a bit more impulsive.

His hobbies are the same, except now include the occasional speaking in tongues and preening his feathers. He has learned to never lower the wings that obscure his face, as viewing his eyes caused an unfortunate seapony to bite the dust.

Alas. At the least, he's not too perturbed about being a eldritch seraphim, or, as he calls it, a Serafurrim.