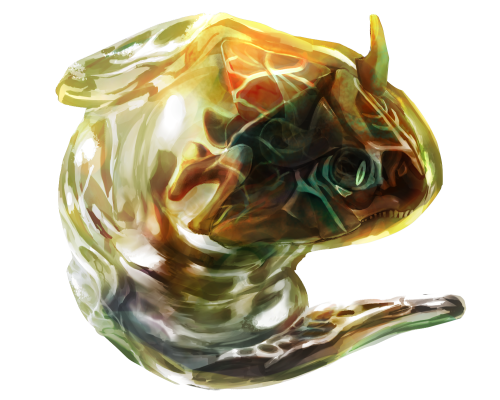 Verdigris no longer has a house! They will be unable to work. Please replace the house or move Verdigris into a FC slot.

Verdigris is a Rosen Bronze 'Fishbone' tarniche. Extended exposure to water has caused discoloration of the bronze, giving it a greenish-blue tinge.

Verdigris can often be found with Novem in the Nova Forge, as both his helper and resident nuisance. It's surprisingly smart, and often found maintaining the forge and playing with the tools in the blacksmith's absence.

If needs be, you can ask it for help instead of its master, if you're willing to put up with the alternating bouts of garbled bubbling and screeching wails of metal that serves for its voice.

A gooey yet sturdy creature, fond of plasma and industry.

Where is home? I've forgot.