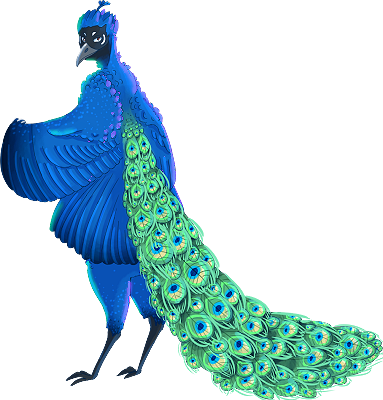 Azel, despite some people's best efforts, remains to be a thief and a very rude customer. He's the youngest of anyone at the village, and uses this as an excuse often to get off of any punishments they may give him. "It's not my fault, I was raised that way," or "It won't happen again, I've already learned my lesson!" are common whines from him, accompanied by a tearful gaze, quivering beak, and drooping feathers. He's a very convincing actor when he needs to be, though this wasn't always the case. For reasons kept to himself, he's been cursed with an Aura of Blindness, causing any living being within a few meters of him to go temporarily, but wholly blind. The blindness hits as swiftly as it goes, being a very jarring and alarming event when it happens to people. Abusing this, he used to rob from travelers, living as a runaway, scavenging to survive, until he tried to rob Rhonden. Unlike everyone else he'd encountered, the Rune Priest actually found him, and then did some rune-y magic to disable his Aura, for a limited time. This couldn't be allowed! And so, if his trickery was taken away, this Rune Priest was going to pay for it! By never being able to get rid of him, the actually-greatest-thief-when-not-magically-disabled Azel! And so, the two of them traveled until they came to the village, where Azel now always keeps his Blindness Aura locked away, even though he still gets into trouble.

He knows everyone in town, for some theft or sassery event. He doesn't do any real harm, so he knows nobody hates him, and he knows when to stop--he'll annoy only until he knows he's gone too far, then scurry away or get whiny to divert the attention to himself. He claims he has no friends, only "prey" or refer to people as "HIS ____", and usually keeps to himself. His known weakness is when Jaquerel tries to act motherly towards him, because he has no ready retaliation for genuine love. It's horrible. And now other people are picking up on it, so he has to get them angry at him again, and fast!

Azel uses his teeth, claws, and talons as his weapon, but coupled with his Blindness Aura, that's all he needs.

Azel tames all the pets. He can't be bothered to go out looking for them, he only wants to breed his army and make them love and obey him.
He's also the crafter for Rhonden as a side-job because he needed someone to do it, and since Azel is always pestering him anyways, may as well give him a reason.
((This is all from an original universe that I've created, known as Prian. If you have any questions about it, feel free to ask! Also, I'm usually pretty open to rp, and all this about Prian is simply used as reference to show that there is something I'm pulling from. You don't have to know anything about it if you want to rp with me, I'll accommodate for anything ^v^ it's all for fun!))
Paintie by Guren <3 and you can commission him here!