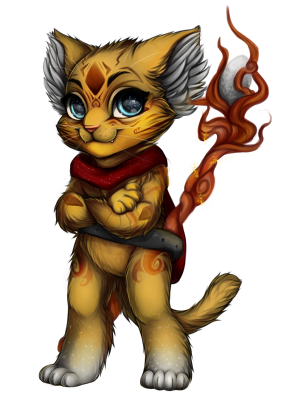 Rhonden is a fairly relaxed fellow, who seems rather withdrawn and extremely studious. He is never seen without his satchel of journals and a writing utensil, the main reason being that for as long as anyone has known him, he's never spoken a single word. However, his journals are full of more than half conversations, as he's a young Rune Priest, and often sketches out potential rune ideas on paper before he tries to imbue them with magic. He's fascinated by other languages, and is fluent in quite a few of them for runic purposes.

He's known Mia and Chimer the longest out of all the other villagers here, and both of them are very dear to him. He looks forwards to when they can hang out together, but he's always careful to never leave Chimer alone with Mia.

Lately though, he's been plagued by Azel, who often loiters around Rhonden for his own inscrutable reasons. Rhonden's wearily accepted this--if you run into Rhonden nowadays, it's nearly guaranteed Azel is nearby. He otherwise is friendly to everyone else, but doesn't pry much, so he's not too close with anyone.

Rhonden is, by no means, a physical fighter. He's very short for his age, and due to a disease or parasite of sorts, his growth has been severely stunted, and seems to have affected his cardiovascular strength. He can barely run for any length of time, or do anything too strenuous. Rather, he relies on his runes and friends for protection, either summoning various creatures or elementals to his aid or empowering his allies with runic magic.

He does the tailoring and carpentry in the village. Meaning, he summons elementals to do the carpentry and supervises them while he practices knitting, because it's a very peaceful activity, and should help him be more precise with his handwriting and rune-making (despite his handwriting already being immaculate). He's also known to handle wild animals on occasion, because Azel just has too many 'minions' to handle sometimes.
((This is all from an original universe that I've created, known as Prian. If you have any questions about it, feel free to ask! Also, I'm usually pretty open to rp, and all this about Prian is simply used as reference to show that there is something I'm pulling from. You don't have to know anything about it if you want to rp with me, I'll accommodate for anything ^v^ it's all for fun!))
<Paintie by Egglantine and you can find her artwork here! >