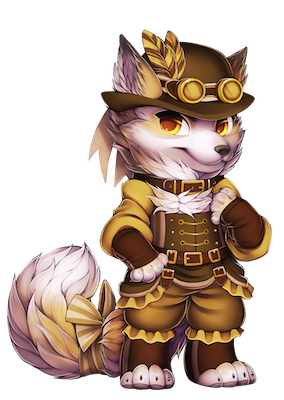 Currently being repaired by Bloo.

Mia is a strong-willed, ambitious woman, and woe to those who stand in her way! She's extremely loyal to her friends and to her own kind, but her stubbornness has caused some troubles in the past. She greatly fears what she cannot understand nor control, but she's working on trying to be more open-minded about the world, as some town members... are tricky. She's sort of become the self-appointed leader of the village, but she gladly seeks advice from Azha, Rhonden, and sometimes Piet, though there's usually a lot more gossiping that goes on with Piet. Regardless, she willingly listens to others advice, and people do go to either her or Azha when there's a problem. Knowing that others trust and respect her advice fills her with pride and the determination to never let anyone down.

She's known both Rhonden and Chimer the longest out of everyone at the town, and she sees Rhonden as a little brother. Chimer, however, she completely avoids, only tolerating his presence for Rhonden's sake. Chimer is really the only person she's snappish and rude to, and his subdued responses only serve to make her more enraged and fearful.

She's curious about Azel, but he never gives her the time of day, and she doesn't have the time to corner him to actually talk to him. She learns about him from what Rhonden writes, but still keeps an eye out. She has tremendous respect for Azha, even if she's a bit wary of them (as she is for any creature that isn't entirely from this Realm). She's good friends with Piet and Jaquerel, and is acquaintances with Bao. She tries her hardest to be polite around Flare, and so long as Flare isn't actively morphing it isn't hard. But she isn't really fond of them.

Lately, she's been inside a lot--she's never been fond of the cold, as it has too many memories for her to recall. She doesn't like to show weakness though, so she'll force herself out if need be... she just tries very hard to avoid being in that situation.

If she must fight, her weapon of choice is a chain, which she flicks about expertly like a whip, and will attach wicked metal ornaments to. (Depending on the rp period, she will also carry a handgun at all times along with the chain.)

Mia works at the smithy, mainly because she wants to regulate the weaponry in the town. It runs in the family, dealing with the town's defenses and such...
((This is all from an original universe that I've created, known as Prian. If you have any questions about it, feel free to ask! Also, I'm usually pretty open to rp, and all this about Prian is simply used as reference to show that there is something I'm pulling from. You don't have to know anything about it if you want to rp with me, I'll accommodate for anything ^v^ it's all for fun!))