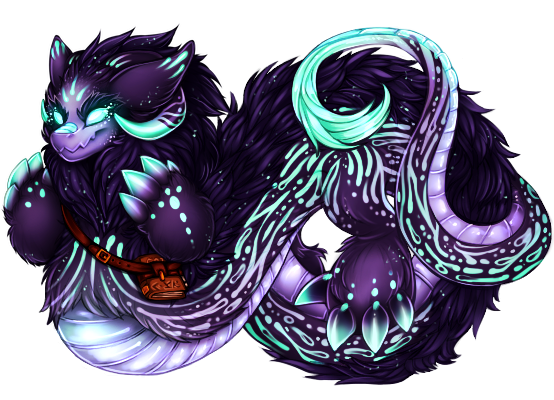 Flare is an erratic character, always toting about a magical journal in which they're constantly adding notes to, about seemingly everything; the sights of this new place, the types of people who live there, the day/night cycles, the consistency of the clouds of Quetzal Palace, humidity, purity of the water, and much, much more. Thankfully, no matter how much they write, they never need to fear running out of pages--only having to carry a much larger book around, as the book makes more pages in itself to be able to hold all the information going into it. Aside from this, they are very inquisitive, and in spite of their stutter, will easily give lectures to those who ask about certain topics, glad to relay information at a breakneck pace without taking any pause for breath. They seem to mean well, even as they're flustered easily, but are polite in respecting what others are comfortable talking about. As a newcomer, they're being very cautious about testing the waters--and studying Light, in all its forms, magical and scientific.

They've not yet become close with any of the other villagers, as no one is sure yet what to make of them. Jaquerel and Mia have, naturally, been trying to show them around and get them acquainted, but when their attention is constantly straying elsewhere and they're lagging behind in their rush to record this or that, they've both decided to give Flare some time to get accustomed to the lands of Quetzal, which they are very thankful for. They're meeting others at their own steady pace.

Of course, this has been hard, with constant moving from village to village for the past few months, but now that they seem to be settling in Tiger Eye Peak for some celebration, Flare has time again to get situated. They now often hole up in their house, where it's eerily silent and all lights are dimmed. No one knows what they're doing, and if asked, they give no concrete response. It's hard to press them for information too, as they'll either ramble on about something completely unrelated or begin some very rhythmic antics, which will often end with Flare simply vanishing, leaving behind a bemused villager.

Flare does wield a peculiar form of magic, and their entire being seems just as shudder-y and uncertain as they themselves are. Whenever a shadow falls across them, they seem to flicker in and out of sight, their voice fluctuating pitch and tone; though as they leave the shadows, their form solidifies again, albeit slightly different than before. They're constantly switching genders because of this, and no one is sure if this alteration in appearance all the time is done willingly or not. They're mostly betting on the latter, and Flare is sheepishly grateful for their understanding. Sometimes they appear to sink entirely into the darkness, only to slip out elsewhere, and give a nervous laugh, remarking about having "tripped", but no harm done, hopefully, as they still have one head and working limbs! Because of this, they don't hang around shady areas, and the cloudy terraces of Quetzal are often housing a meandering Flare, who's simply trying to work things out.

If Flare needs to defend themselves, they retreat into shadows and darkness. Nobody knows what follows; let your imagination tell you.

Flare, being out and about, just kind of... happens across animals now and then. So they catch them to study them. Or, at least they try to catch these amazing animals, but they are horrible at it! Yet when they succeed they're ecstatic, but inevitably loses track of them as Azel swipes them off to domesticate them into his army. Flare simply shrugs off his vanishing catches as "slipped into the void".
((This is all from an original universe that I've created, known as Prian. If you have any questions about it, feel free to ask! Also, I'm usually pretty open to rp, and all this about Prian is simply used as reference to show that there is something I'm pulling from. You don't have to know anything about it if you want to rp with me, I'll accommodate for anything ^v^ it's all for fun!))