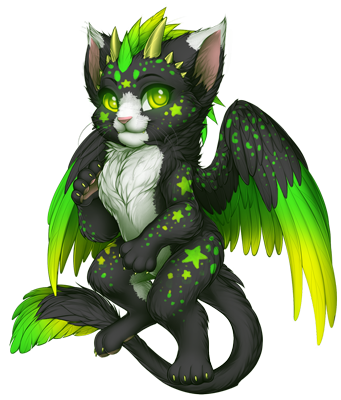 "So many boxes... Such a mess!" The hybrid exclaimed, cleaning what she could before her ears flicked, turning towards you.

"Hm? Oh, hello! Sorry about this mess! The name is Bella Nox! Nice to meet you! I am your friendly delivery girl, soaring to many places to bring people lovely packages!"

You ask what she delivers.

"Oh! I deliver many things! It ranges from minipets, FC... Just about everything! I give what the people deserve! If you want me to deliver something, just give me the word!"

Backstory/Bio: What exactly when you mix a Dutch Angel Dragon, stardust and toxic waste together? You get this little bundle of joy.

Bella is a... Or was, a Dutch Angel Dragon, one with smaller wings no less. I mean, most Dutch Angel Dragons did have those. When flying to deliver a package of stardust, she had sprained her wing from hitting it on a rather large branch she couldn't spot in the darkness, and was sent flying into toxic waste. Why was the toxic waste there? Don't ask me. It may be the fact that she was flying through Dragonsmaw. Toxic waste was rather common around the area she was flying in. When she emerged from the toxic waste, she didn't feel or look different. She just shrugged it off and went home to wash up and rest her wing. She would also need the sleep from doing all these night shift deliveries.

The next morning, she woke up with a rather small yawn. She stood up, knowing that flying probably wasn't going to be good for her wing. She walked past a mirror, and she had a feeling... Something didn't seem right. She stood in front of the mirror, and surprise seemed to hit her in the face like cold water. She was completely different! Like she was looking at a stranger! She had a cat head, horns still seeming to be there from her other look. Stars and spots seemed to speckle her body and wings (probably from the stardust that went into the toxic waste with her), which note, they were larger now. She now had the coloration of the toxic sludge she had flown into, along with black and white like the tuxedo cats she would often see walking around, exploring as she did deliveries.

She didn't know how to view herself since then. She was mutated. Different. How would the others view her now? Would she ever be able to deliver things to people if they saw what she was now? She was getting upset about it, but, after some time, she had gotten used to it. Though others may not accept her, she is keeping herself proud and flying high.