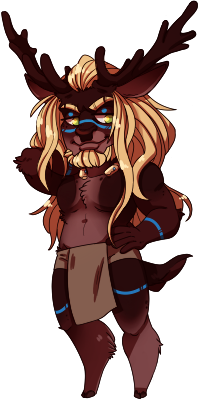 The Erlking no longer has a house! They will be unable to work. Please replace the house or move The Erlking into a FC slot.

Deep in the forest lives a creature not man, nor beast. Some call him a god, others a Faerie, but he is known to himself as the Erlking, and he is the leader of the Great Hunt...

... Or he was, but the time of hunts have long passed, and now he spends his days in the woods, communing with the animals who live in his dominion, or tormenting those humans foolish enough to wander too deep into the trees.

If you are unlucky enough to cross paths with him while lost in the old forests of the world, do not follow him. He will only lead you further astray.
Name: The Erlking Herne
Other Names: Herne the Hunter, Herla King
Age: Ageless
Gender: Cismale