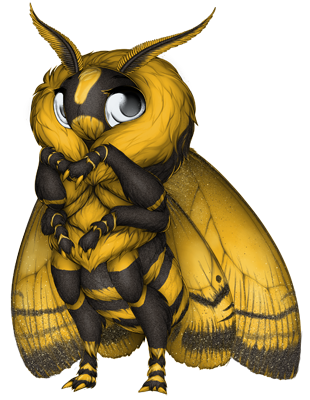 Tags: moth deaths head moth not a bee i swear

Ruth (3'8" & 48 lbs) takes it upon herself to be the bigger sister of the moth twins, even if Baby was born mere seconds ahead of her. She is much more emotionally stable and mature, but comes across as unfeeling and deadpan sometimes. She often gives other villagers the wrong impression because she doesn't react to things they way they intended. It's hard enough telling if a moth is even smiling in the first place... She loves her sister dearly and puts up with her unending pessimism without a single gripe. Ruth does, however, tend to be aggressively protective of her twin to the point where she will pick fights with anyone who looks at them funny.