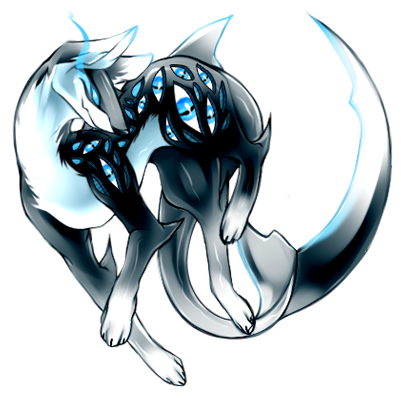 "Looks can be deceiving."

…We've all heard that at some point in our lives, haven't we? Ah, yes. People, no... Animals that can look cute and cuddly turn out to be monstrous and vicious predators. Others that look horrendously weak can be frighteningly strong. Fierce looking beasts can be gentle guardians, and so on and so forth. The phrase holds true for Gaze, as well. Looks can be deceiving, and what you see isn't exactly what you get.

At first glance, the glowing blue eyes tailing you through the night might seem scary. Or, maybe it's the glowing clusters of holes on the body, that sometimes change into bright blue eyes. Yes. When you look like this, naturally, most people would be afraid of you. Some might even call you a monster.

But Gaze is not a monster.

True to his name, Gaze is a very watchful Haikatt. If you should find him following you through the night, know that he is simply keeping watch over you, seeing you to your destination safely. He comes and goes as easily as a ghost, one minute you'll see the trailing blue embers of his eyes, the next he'll have vanished. Keep yourself alert, however, because as watchful as he is he can also be a bit of a prankster. You never know when he might appear in front of you. His pranks are well-meaning, it's just that many people don't see them the same way he does.

Despite being tamed, Gaze tends to wander around at his own leisure. His owner and his companions don't worry, as he knows his way home and always returns after a couple of hours. He is a curious Katt, much like Helia is, but unlike the other Katt he is much more cautious around the unknown and prefers to observe rather than interact. Gaze hopes that, If other villagers around FurVilla could look past his unique appearance, he might be able to make some new friends.

When not roaming around during the night, he makes a truly capable guard. The extra eyes on his body allow him to see in many different directions at any given time, making it near impossible to sneak up on him. Even when he sleeps, the eyes on his body stay open, always alert and always keeping watch. All of the villagers in the group interact with him and look after him, but he has bonded with the two warriors in the group more than anyone else. Having joined them in a few battles, Gaze seems interested in the career of Warrior and will soon be learning to fight with the help of Arsenic and SnekStomper.

Haikatt species created by CharcoalCrow! Read more about them here!
Get your own!!