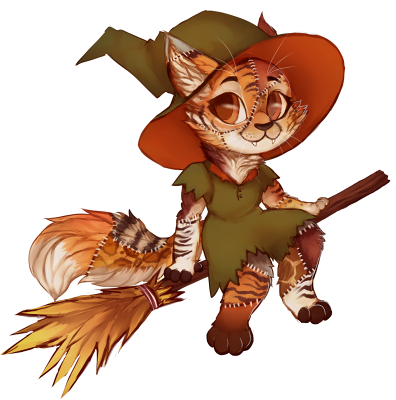 Fray has fallen ill with Broken Limb. They will be unable to work. This illness can be cured with Medicinal Gauze.

All comments by Fray are in-character

Craftsman of amalgamations,
hater of unfinished seams.
Once I began crafting, I just couldn't stop my needle...

Animals, too, can be like clothing. Every time you see something you want, you can make it for yourself. Every time a piece goes rotten, you can cut it out and replace it with something new. Every time you find a piece of yourself you don't like, you reinvent it.
Fray is a good person, really, she is. Like everyone, there are just pieces of herself that she doesn't like. Unlike everyone, Fray just has the power to fix the things she doesn't like about herself. She cuts the bad parts out and makes herself new parts, and every time, her love for the cat in the mirror grows a little. Every stripe and spot is hand crafted to perfection. Fray never envies those around her, because she has everything she could ever want sewn right onto her own skin. She is patchwork perfection, and has a weakness for those animals and objects just like her, crafted with care from many pieces that work together harmoniously.

Power like that is something often sought after. Villagers sometimes come to Fray, begging for a magical plushie, a costume that will change their lives, or a toy for their pet that will outlive even the most aggressive chewer. She delivers them all, flawlessly executed. Her greatest achievement so far, however, was the crafting of an entirely new body for a once-beloved Tailor of the kingdom. When they brought his body to her, Fray took on the challenge with a vigor and excitement never seen in her before.

Every stitch, an arrow through the heart. Every delicately selected spot of fabric, a memory. Fray put the proverbial Humpety-Dumpety back together again, and asked only for a future favor in return. Proud and pleased, she returned to her work. However, she is not often a dealer in soul bindings, and it seems there is only so much you can stitch back into a person, working only from the surface, and with no concern for the stuffing within. Not all the pieces always fit together so perfectly.

Once she got started, she just couldn't stop. Fray became addicted to creating new life, and was hired as the kingdom's official tailor. Not only did she sew the most beautiful clothing for the aristocracy, shimmering and fluttering as if with life, she also crafted them the most extravagant toys to behold... Living, breathing toys, beautiful as anything that ever lived, crafted from hand stitched flesh.