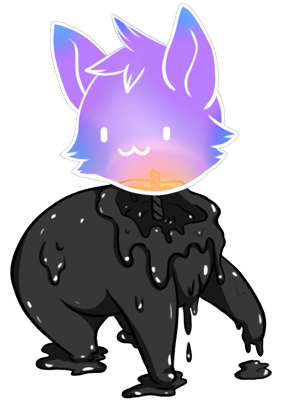 Started off as a Wickling with a calm, peaceful demeanor and a grin that bordered between innocent and mischievous. Like knowing it all, and at the same time nothing at all.
From the Nullnoise genes, Ultraviolet also developed the ability to transform into a Wickwulf. As a Wickwulf, their personality changed a bit. They were more friendly, but also more defensive and developed a sense of loyalty.
Ultraviolet had a bit of conflict between their Wickling and Wickwulf self, as the Wickwulf would question the loyalty of the Wickling and the Wickling was unreadable.
So Ultraviolet would have some inner conflict and dialog with self. Ultraviolet wishes to get to know theirself more intimately without any outside disturbance.