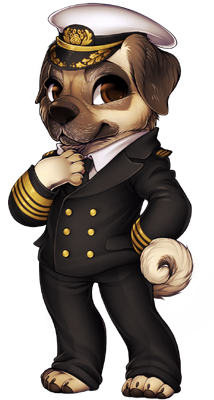 Brenna is infected with Lycanthropy. Changes into a beastly monster after exposure to moonlight or especially frustrating board games. Howling at the moon relieves the symptoms for a little while, but use a Golden Apple for best results.

As you curiously tour the Singing Tide, you find a pug dressed in a sailor’s outfit working on mending the sail.

"What do I mean? Well, I washed up ashore here on Ouroboros, and that’s the first memory I have. Everything else, before I woke up being tended to by the people here? Gone. Everything from before September eighth, 2020 is just one huge blank. And no matter how hard I try to remember, I just can’t get anything from it. Everyone says not to push it, but...I want to remember, you know? Who I was before."

"Most of what I know revolves entirely around sailing. I can’t remember my name, but I can remember how to keep a boat in top condition and navigate the open seas. Figures. At least it tells me I was a sailor before, which kind of matches up with my outfit. It’s what I was wearing when I first washed ashore, and all I have of those forgotten years. I might have Calypso too, but whether she was a lifelong companion who saved me or a wild kelpie who wanted to help, I’ll never know. It's not like she can tell me."

"I’m an adult, but I don’t know how old I am. We’ve kinda just had to guess, and the general consensus is that I’m in my thirties, or maybe even my early forties. But unless I remember we’ll never know for sure."

"What am I doing now? Well, I’ve decided to live here. I mean the people here offered to take me to any of the capital cities if I wanted to start over there, but I like it here. They were kind enough to not only help me, but to go out of their way to do so, and I want to pay them back in kind. Happily for me, Kahjah was more than willing to let me be first mate on her boat. She’s a great captain, and really knows her stuff when it comes to the sea. I swear it’s like she has a sixth sense for it; some of the things she does I didn’t even know about."

"Jörmungandr‘s been teaching me the unofficial second language of Oceandome, Whistle. I mean it only makes sense; it’s much easier to communicate underwater in it. I just don’t understand why I’d never learned it before, if I didn’t my life on the waves...or maybe I did, and I just can’t remember. Who knows? Certainly not me."

"What, pirates? Bah, those blasted treasure thieves, always up to no good. I don't hate Southpaw for it, he's lost enough already, and turned over a new leaf besides, but others? Ugh. You know a band of them actually tried attacking Ouroboros once? Ha! It certainly didn't end well for them!"

"My hobbies? I really like fishing. There’s just something incredibly relaxing about sitting out on the docks for hours, with just me and my line and whoever wants to join me. Usually Rowan; she loves fishing too. We'll sit out there for hours, chatting the day away or sitting in companionable silence. The kids know better than to play there, both because of the danger of being hit by a boat and because I told them that if they scared away the fish one more time I’d thump them good. I wouldn’t really, but they don’t know that. And it worked. Granted, it was probably my transformation that did that more than my yelling...though that doesn't stop the little rascals from trying - and sometimes succeeding - in stowing away on the Singing Tide."

"Oh, um. I'm apparently a were-pug. Or something. I transform during the full moon, or when I'm stressed out. It can be useful, I mean I'm more durable and heal more easily than I should be, but uh. I'm still a lycanthrope. Seraphina had no idea what it was at first, until old Zinnia explained that Dragon's Maw Manor tends to have an outbreak of lycanthropy, zombipathy, and vampirism around the time of the Harvest Carnival...mystery solved, I guess. Since everyone lives out here on the island its kind of understandable that no one would've gotten infected before. I guess all of the warriors plus Kahjah and I are at the most risk, since we're the ones who travel most often to the mainland. Especially Kahjah and I...and the kids if they manage to successfully stow away for unsupervised trips, it's happened a couple times. That's more than a little worrying..."

Brenna falls silent for a minute, continuing to work on the sail in her paws. She stops as soon as she hears the lilting sounds of Whistle pick up in the distance. That voice is soon joined by another, and then another.

"Oh. I need to stop working then. There's this Oceandome tradition of singing in Whistle together in the evening, to call families together and discourage overworking. So no overtime for me on this boat, haha. Good luck on your travels, and stay safe out there."