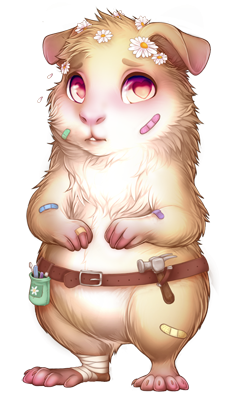 On top of the inn, there seems to be a large guinea pig hammering away at the roof tiles. You stare at her for a moment before something is nudging at your feet. It's a large silver mimic that seems to be gazing at you. It jumps and lands ever so quietly. It's the most quiet mimic you've ever seen. Inside, it's holding a bunch of nails and boards. It must belong to the carpenter on top of the roof.

You call out to her but as soon as you say a single word, the guinea pig shrieks and takes a huge tumble behind the inn. You chase after to see if she's alright.

She seems to have fallen into a large hay pile thankfully. Her head poofs out of the hay like a mole and looks around bewildered. Her nose is twitching incessantly. She looks at you and ends up freaking out again. She ducks down into the hay pile for almost an entire minute before realizing she's not in danger.

Her voice gets quieter with ever word she utters. The mimic from the front saunters it's way over to you, with a little difficulty with the hay. It barely makes a noise as it jumps up to it's owner. It seems to be trying to cajole her as it flaps open it's mouth over and over. "Thank you Twinkle..." The guinea pig calms down a bit.

"I'm um...Daisy. I'm...sorry that I freaked out. Really...really sorry...about that..." She bows slightly towards you picking up her mimic and running off to the ladder set up behind the inn. She grabs a few nails and boards before making her way up towards the roof again.

An extremely timid carpenter. She gets easily frightened by absolutely everything. She tends to space out half of the time and the other half she's so concentrated she doesn't notice anyone else. There is no middle ground when it comes to Daisy. She ends up having a lot of injuries from dropping her hammer due to shock. For some reason, her nose is always twitching.