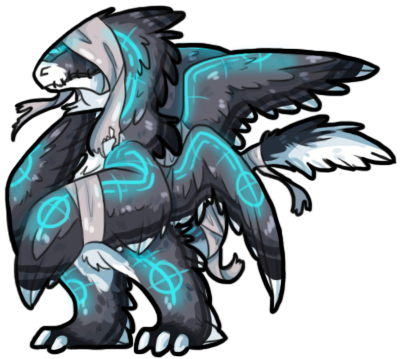 In a twisted corridor carved of thorns, branches, and bramble, lies an ominous path. He calls it, "Hell's Gate", the creature who stands between you, and the doorway. His tired, hidden gaze falls upon your features; dirty grey feathers ruffle as he shifts his massive body from within the shadows of the gate. His mouth, sewn, doesn't move as a voice falls-- not upon your ears-- but your mind.

In what sounds like a rasping breath, it begs you to leave-- to flee from this place, to run as far as your legs can take you the other way.

They can feel your presence -- he tells you -- they grow restless inside.

General:
A tired and exhausted creature. Gabriel calls himself an angel-- a seraph-- and with his six beautiful, but broken wings, it's easy to see how the large beast could talk you into believing such a thing. But something simply doesn't feel right about it. When pressed, one might be able to hear the creature slip up, mentioning that he used to be an angel, in a soft, disgruntled tone.

It's not entirely known how long Gabriel has been sitting before the place he calls, "Hell's Gate", preventing unfortunate wanderers, cultists, and thrill seekers from entering whatever lies beyond it. The creature appears to have no knowledge of what goes on beyond the dark space he lies in; boats, and skyscrapers-- modern technologies-- seem to be beyond his knowledge-- so one could assume he's lain there for many, many years.

Despite his general unwelcoming presence and attitude, in a vague light-- Gabriel enjoys the presence of others. The few wanderers who pass by only a few times a year, or maybe not at all, seem to be the beast's only connection to anything beyond the dark corridor he lies in.

Paintie & Art by myself.
Open for roleplay.