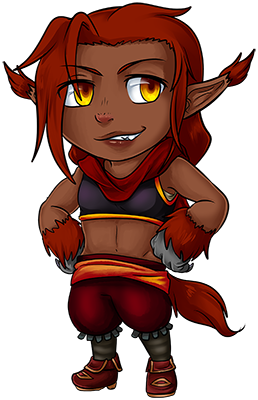 ╭━━━━━━━━━━━━━━━━━━━━━━━━━━━━━━━━━━━━━━━━━━━╮
An energetic and eager explorer with a kind, but cautious heart. The daughter of the chief of her hometown.
╰━━━━━━━━━━━━━━━━━━━━━━━━━━━━━━━━━━━━━━━━━━━╯
Age: 26
Birthday: July 26
Zodiac: Leo
Height: 5'6" / 170.68cm
Weight: 150 lbs / 99.79kg
Figure/build: Mesomorph/Toned
╭━━━━━━━━━━━━━━━━━━━━━━━━━━━━━━━━━━━━━━━━━━━╮
-==SIGNIFICANT OTHER==--
Arlos
You'd be surprised to find that out of the two, Arlos tends to be the one that gets easily flustered. Maybe it's due to the deep affection he has for Ramla, or because he's not used to being so closely attracted to someone prior to this relationship. Regardless, he is usually seen blushing at Ramla's antics, even when he's working in his blacksmithing job.
Ramla tends to tease Arlos quite a bit, but it is never mistaken for insults. The two have a specific tone they talk to one another in which makes it obvious they're just pulling each other's legs. Ramla tends to try and latch on to Arlos a lot, and loves being hug by him, sometimes at the detriment of his blacksmithing. They both share their interest of adventuring and treasure quite extensively. Were you to go to their room, you'd find several treasures and trinkets they pick up when they go off into one of their journeys.
While Arlos is organized, Ramla tends to leave things behind wherever she goes, unintentionally more often than not. She is clean, she just tends to forget to pick up all her blueprints and maps when she gets distracted with something else.


--==PERSONALITY==--
Hot-headed, stubborn, and very adventurous, she is very quick to jump on to adventure. Ramla is known for being quick to anger when it comes to injustices in the world. She is also very cautious of those who aren't from her land of Arklime, due to the stigma of Half-Beast races in her home world of Migdal Eder.

Despite her sometimes overly cautious nature, she keeps it well hidden behind a confident facade of optimism and pride. She can sometimes come off as narcissistic due to her confidence in combat, and can sometimes be a sore loser if she doesn't come out on top. Despite this, she is always eager for a challenge, combat or not, and always seeking to better herself through experience or sheer hardheaded stubborn will.

Her curiosity sometimes gets the better of her, and will sometimes get her into varying degrees of trouble. From getting stuck, to getting chased, Ramla still finds the exploration of old ruins and archeological sites the best pass time. She loves to collect trinkets, be it from ruins or gifted, or bought for her, she'll take almost any old artifact eagerly. She always awaits trade caravans to pass by her home town with sparkles in her eyes due for that very reason.

Like most Arklimians, Ramla is proud of her heritage that flows in her blood, and insulting an Arklimians is like insulting an entire nation. It is almost a surefire way to cause a rain of insults and profanities to Cascade from their mouths. More often than not they'll puff up and demand a challenge... Or end up enticing a fight.