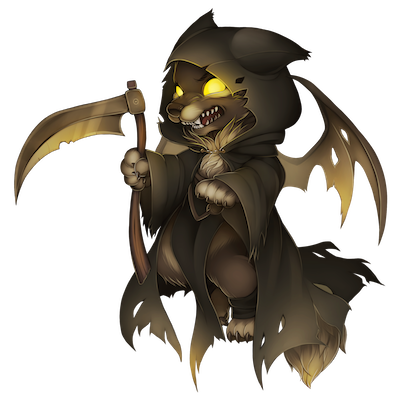 Kahjah is infected with Lycanthropy. Changes into a beastly monster after exposure to moonlight or especially frustrating board games. Howling at the moon relieves the symptoms for a little while, but use a Golden Apple for best results.

As you walk down the village road, you turn a blind corner only to collide with another person.

"Whew, that's good. My name is Kahjah. It's nice to meet you, first impressions aside haha."

"What's a reaper like me doing on an island like this? Ah, I'm actually from a village just on the border of Olde Foxbury and Dragon's Maw Manor, in the mountains, but that's a moot point. Ouroboros is my home."

"Why did we decide on the name Ouroboros? Well, because it both sounded cool, and had an important meaning. Ouroboros is the symbol of eternity. And no, I am not immortal. One day my life will end, that is the way of things. But death leads to new life, and life inexorably leads to death, and so the cycle of nature continues."

"Granted, there are those in Dragon's Maw Manor who are either undead, resurrected, or reborn like Ephemera, Xino, and Azalar here, but they were still living who became dead. And now the dead have found life again. So no, I do not believe the undead are unnatural."

"My Night Sky Draorse? Her name’s Emmigosa. Isn’t she beautiful? She’s named after the little baby dragon whelpling in WoW, who is, and I quote, “the great-great-great-great-great granddaughter of Senegos.” You get her from helping said grandfather in protecting his brood, what little remains of the Blue Dragonflight."

"Heheh, sorry. I really enjoy the game, as you can tell. If you play it or even just wanna talk about it more, I’m all ears! Otherwise, I’m not gonna info-dump on ya."

"You want to know what my other hobbies are? Reaping the souls of the innocent. Hahaha, oh jeez, your face! No, I don't do that. Sorry, I couldn't resist, it was just too good of an opportunity."

"In all seriousness, I love being in forests. They’re beautiful, and what I grew up surrounded by in my hometown. But I equally loved the ocean. The sand beneath my paws, the sounds of the waves, all the little rocks and shells and tide pools...it’s simply beautiful. Sailing sings in my soul, just as much as the autumn leaves and the spring flowers do."

"Yep, that boat in the harbor’s mine. She’s called the Singing Tide, and I’m in charge of deliveries both to and from the island. I never sail alone though. It’s always best to be with friends, both for the company and for the extra paws. Brenna has been a great friend ever since she washed ashore on our island without any memory. It’s been nice to have someone to talk shop with, so to speak. Nobody else here knows much about the finer workings of ships, after all."

"We have to be on the lookout, though. Sometimes the kids think its funny to try to stow away. Trust me, docking in another region only to see a tiny head poking up from the galley is not a good feeling. Azalar attempts it more than most; he seems to have taken a real liking to the King of Roses, his name is Koa. First time he successfully snuck away we all had a heart attack. Thank goodness King Koa brought him back, and oh man did Azalar get in so much trouble for that stunt. We need to find some way of keeping track of that kid, he is way to good at being quiet and getting where he's not supposed to. Like my boat."

"Speaking of, I was just on my way to the Singing Tide. Did you need something, or were you just saying hello?"