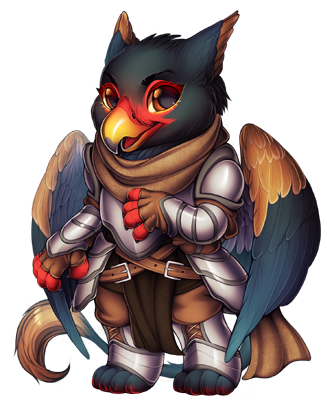 Zinnia is infected with Lycanthropy. Changes into a beastly monster after exposure to moonlight or especially frustrating board games. Howling at the moon relieves the symptoms for a little while, but use a Golden Apple for best results.

Name: Zinnia
Age: 81
Career: Warrior (Retired)
Favorite Color(s): pink and orange
Likes: sparring, giving advice, being with kids, relaxing in the sun, and visiting family
Dislikes: those under her care being threatened, slowly losing her skill with age, her injury, sand getting where it doesn't belong, and her own wobbly flying
Favorite Food: Mammoth Roast Feast
Hated Food: Foxitos
Other: Carnivore, Toyhouse

An armored gryphon is leaned back against a rock on the sands, flail prominently at her side as she watches Caspian, Lyra, Caireann, Corwin, and Azalar play. You know the old veteran is more than well aware of you, and you get the feeling that had you been a monster, you would have already been cut in half.

"Hail, traveler. Do you need something?"

"My name? I am Zinnia, and my frost golem companion here is Glastrier. He's been a faithful friend since I was but a greenhorn chick swinging around a wooden sword and calling herself a warrior."

"Where I’m from? Ha, is it that obvious? Yes, I’m not from around here. I hail from the frigid heights of Tiger Eye Peak, where I was born and raised alongside my brothers and sisters on valor and heroism. We are a family of warriors. Battle is in our blood. For generations, my family has fought against all manner of foes in our icy homeland."

"You think we- oh heavens, no! Any fool who derides the noble art of healing is only a body that hasn’t realized it has died yet!"

"Ah, forgive me. I am somewhat...passionate about the topic."

"Why am I here? Ah well, I’m afraid I was crippled in a battle against a Harbringer some time ago, and wanted to retire somewhere quiet, with plenty of little ones around. I’d say I’d found it, wouldn’t you?"

"No, only young Caspian and Azalar are in my care. Lyra is Genesis’s and Zale’s daughter, while Corwin and Caireann are Ronan’s twins. These two boys on the other hand have no parents to look after them. And so I became their guardian. I never had children of my own, but these boys...I love them as though they were my own sons. Even if they are determined to turn all my feathers gray with their antics."

"How do I get along with the other warriors here? Just fine. They naturally come to me for sparring and advice, and though I may be crippled I can still put up a good fight. I retired because I chose to rather than because I had been entirely robbed of my skill."

"All of the villagers here who are the dead walking again are children. Xino, Morgan, and Ephemera are teenagers for a second time, having been reborn here from a distant other world. And then there’s poor Azalar...we don’t know how long the poor lad’s been dead, or how long he spent in that swamp Kahjah found him in alone."

"We wouldn’t be surprised if the place had been his grave."

Zinnia gets to her feet, stretching.

"I must take my leave of you now. It is time I took Caireann, Lyra, and Corwin back to their parents, and Azalar and Caspian back home. Though if you do have the time, they’d love it if you said hello. If not, then take care, traveler."