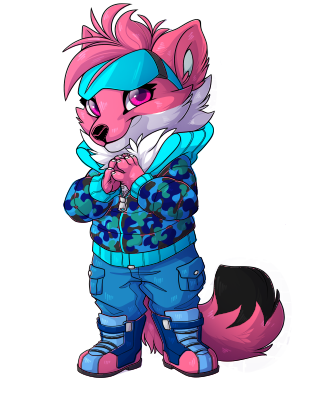 Nova is Yuri's soul mate and dear husband, Nova is a pink and white fox that possesses the elemental power of fire, the polar opposite of his mate Yuri, Wille small he has a big heart and a bubbly demeanor to him. Although he's a fox Yuri's family adopted him into their clan as the first fox/outsider in the wolves clan. Nova quickly became friends with Yuri's mother Asena and with the rest of the clan. Nova does have a fiery temper if sparked but stays calm. Nova much like Yuri will use his power for fun and for an advantage as well.
When Yuri is deployed from home, Nova has one of Yuri's dog tags with him, just like Yuri and his photo.