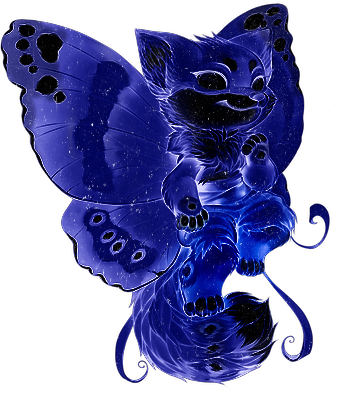 The snow had piled up around the ruins of the city, and Azazel was concerned for the wellbeing of the animals in the surrounding territories. He grabbed his travelling bag, and headed out into the blizzard, the snow melting around his body, standing no chance against the high temperatures. He took a deep breath, and let some of the liquid in his body run out of the pawpads on his feet. Blue will-o-wisps were left in the snow where he walked, lighting up the rubble and casting an eerie blue glow behind him.
The sound of animals following his trail made him smile, and he continued on his way, treading a path known by heart towards a large cave made out of ice and stone. Right before he was about to step underneath the overhang of the cave, he spread his wings and rose into the air, hovering above to see if the animals would make it in safely. They did, several ferrets and rabbits entering at first, and then eventually an entire tribe of monkees that he was familiar with, having fed and taken care of them on multiple occasions. The monkees could withstand the cold, he knew, but it made sense that they would want to be somewhere less open nevertheless. Suddenly, one of the elder monkees started to panic, and Azazel noticed that one of the little monkees was missing. He immediately flew in the opposite direction of the cave, his eyes scanning the snow. He had better eyesight than most, and the snow couldn't get in his eyes to blind him, so he would be alright. He caught sight of a little face in the snow, and swooped down, lowering his body temperature just enough that it wouldn't hurt the small animal. The monkee recognized him instantly and jumped up to cling to his arm as he bent down to scoop it up. "There, there," he crooned, trying to soothe it as it looked around, trying to find its family. He took off, heading back towards the cave, the monkee safe and sound. When he landed, the elder monkee looked up, and saw the missing baby. She ran over, and gently took the little one, a grateful look in her eyes. Azazel nodded, patting both their heads, then walked back out into the snowstorm, the blue wisps flaring up in his wake. They would be just fine now, he knew it. With a smile on his face, he made his way back to the village in the ruined city, happy that he had at least helped to make this night a tad happier for the animals.